“You have to come over next Sunday – we’re making Tamales”.

Well, who on earth would turn down an invitation like that? And so it was that Monica LeRoy invited me to her home to participate in her family’s traditional Tamalada – or the long and laborious task of making tamale from scratch. I first met Monica through her son Evan, who is a culinary whiz in his own right, helming the pits at Freedmen’s in Austin, Texas.

Hosting a Tamalada around Christmas time is a tradition, though no one seems to know exactly why, other than “it’s just tradition”. Maybe it’s because the many hands required for the assembly line is a great excuse for friends and family to get together, which is really the crux of the holiday spirit. But historically, Tamale making has always been a social event, gathering many people together to pitch in and get the job done. Traditionally made by women, the fiddly parcels of goodness date back to pre-Columbian times and have roots in Aztec and Mayan culture.

Tamale are kind of the original to-go food, with the corn husks acting like a sort of primitive Ziploc baggie, making them portable snacks. In modern terms, a good tamal is an elusive and highly-sought after delicacy. Sure, you can get them around at certain restaurants, but it’s unanimously agreed that they never taste as good as a home made version. Put it this way, getting an invitation to a tamalada (or more like, getting access to the fruits of a tamalada) will make most of your friends very, very envious.

Monica was born in Southern California, and her Christmas tamalada tradition goes back many maternal generations. Their family recipe of a red chile based tamal traces back to the Mexican state of Sonora, and her grandmother’s home town of Minas Prietas. Monica paid little attention to family tamaladas growing up, happy to let her mother do most of the work and preferring to just enjoy the finished product. After moving to Texas in 1992 with husband Gary, Monica realised she was approaching her first tamale-less Christmas, which sent her into a flurry of nostalgia-driven panic. “I called up my mom, begging her to give me the full details of the recipe – and this was in the day of long distance phone charges, too!” she reminisces. Her mother, Irene, eventually ended up transcribing the recipe, and the yellowed (now plastic-protected) sheets are still used at the LeRoy family tamalada today. And for the record – not a year has been skipped since the inaugural Texas edition. 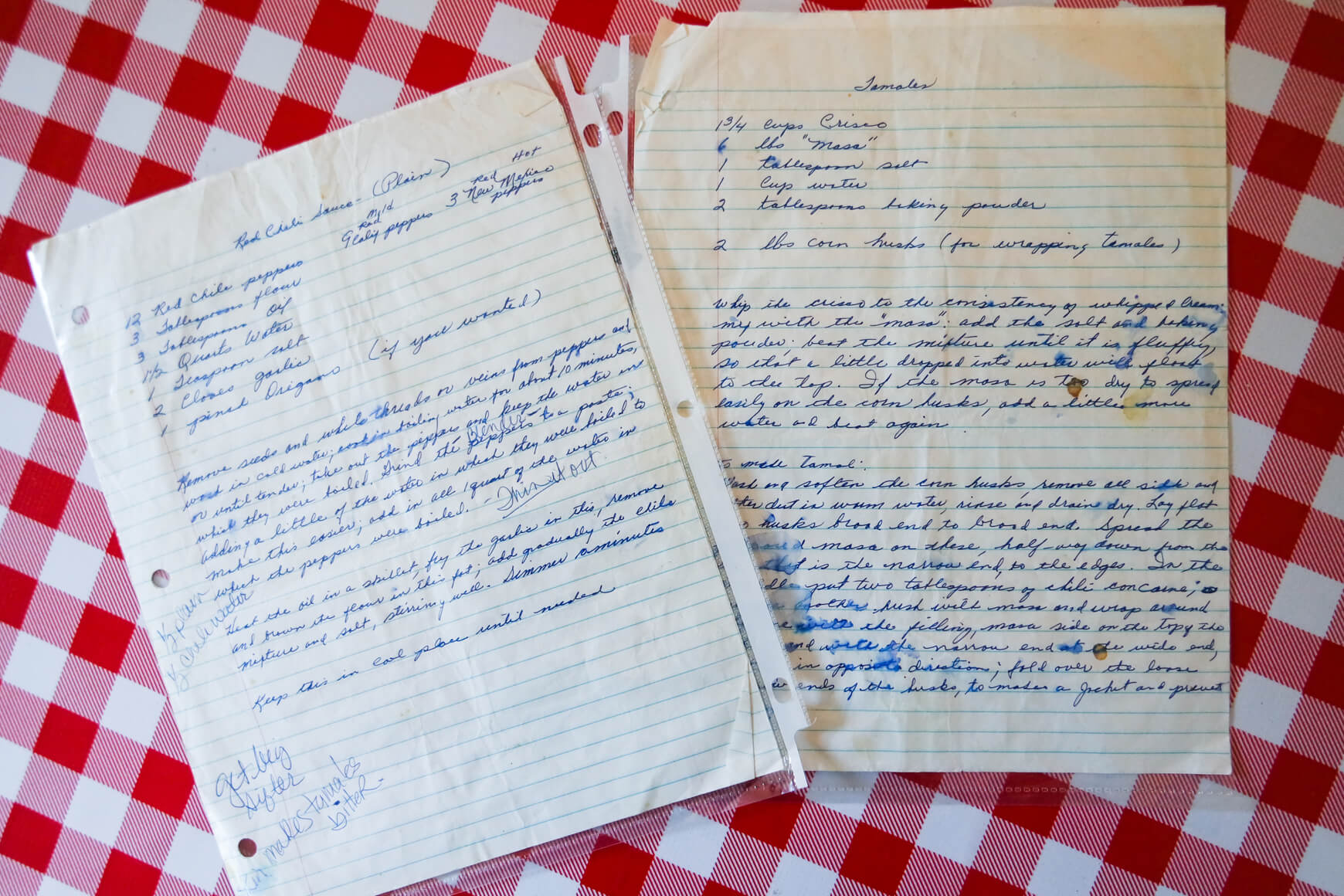 We started at 9am, and even at that early Sunday hour, Gary had already made a trip to El Milagro, a tortilla factory on the East Side, to pick up fresh masa. This was not masa preparada, which is the ready-to-go version, this was just plain finely-milled white masa, that would require some work.

The meats had already been cooked overnight in five different crock pots. Let me say this – when you go to the trouble of making tamale, you may as well make as many as you possibly can in a day, because you’re not going to want to do it again anytime soon! Pork shoulder and any cheap roasting or braising cuts of beef are used, cooked until fall apart tender with chicken stock, water, salt, pepper, onion and garlic. The meat is removed from the liquid left to cool, but only shredded after the chile sauce has been made, to stop it drying out too much.

The chile sauce is a process. Some may even call it an ordeal. But all of this effort and attention to detail has a great deal to do with why homemade tamale still rule over all others. A ratio of 3:1 California to New Mexico dried chiles are used, and first they have to be split and deseeded, a process that most definitely requires protective gloves. 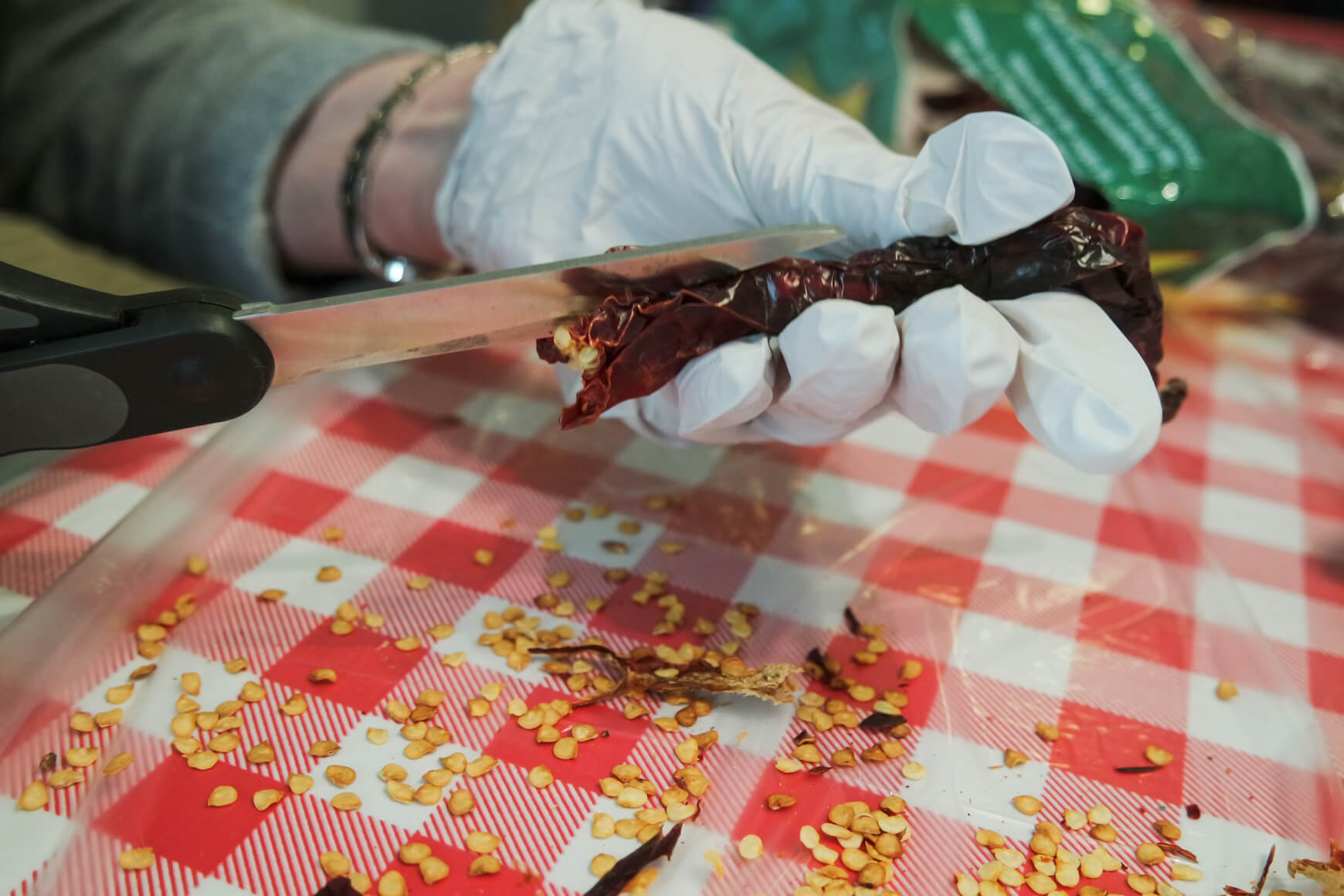 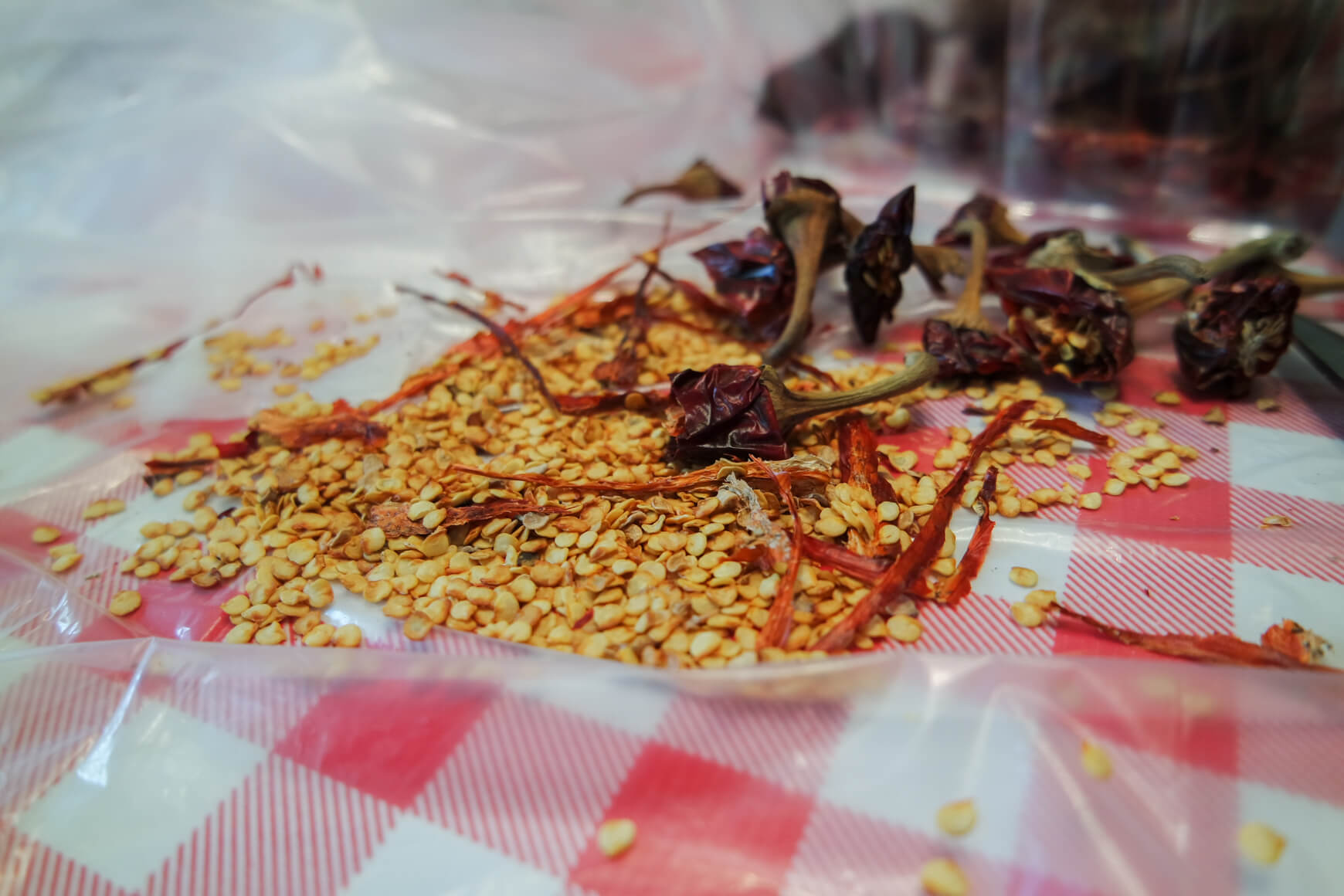 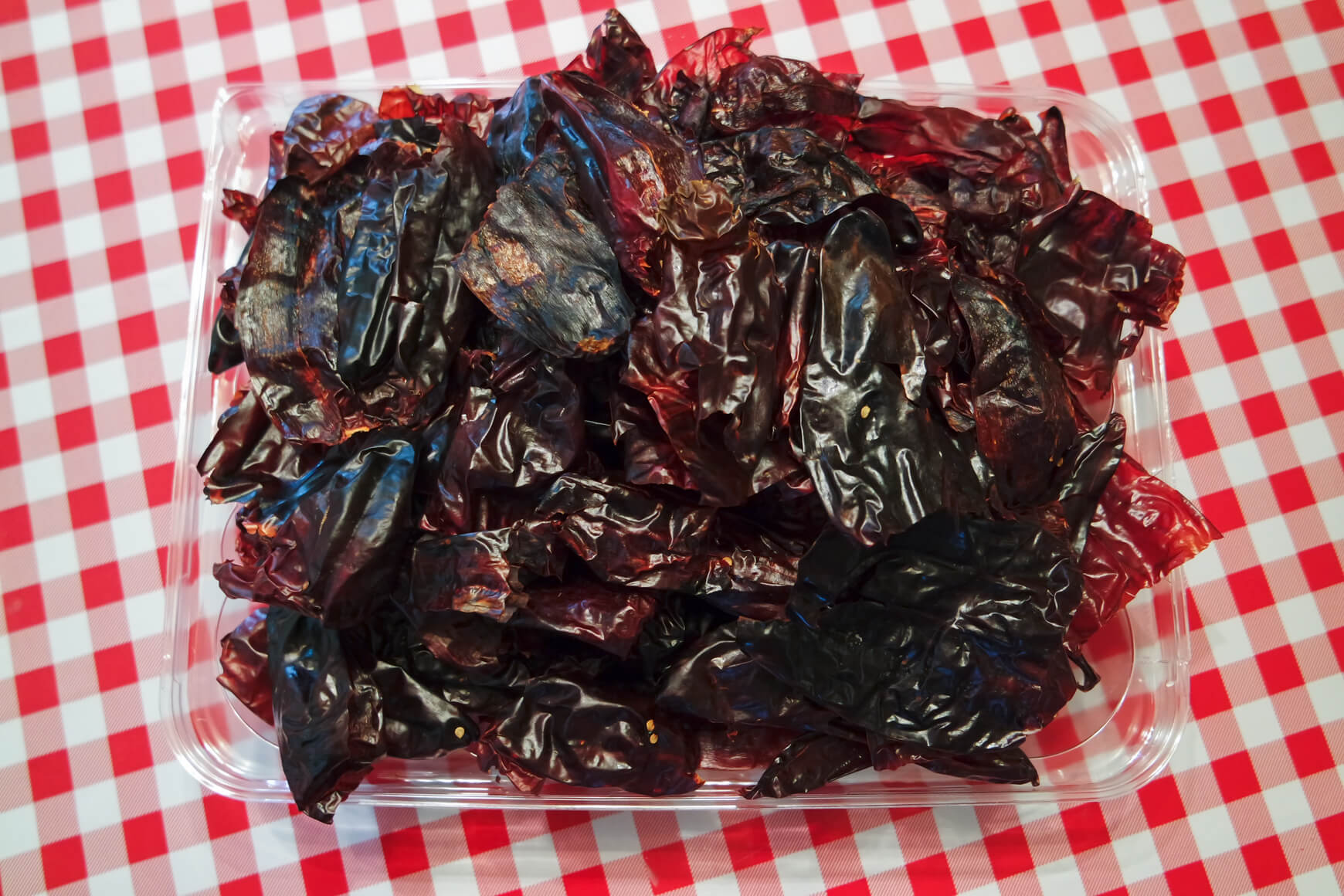 The chiles are then soaked in water to soften them a little before being put into an almighty pot for a rapid boil. Once completely tender, the next repetitive process begins. Batches of limp chiles are transferred to blenders and whizzed up, before being poured into fine mesh strainers, and pushed through with wooden spoons. Any solids remaining in the strainer are placed back in the blender to try and extract as much sauce as possible. 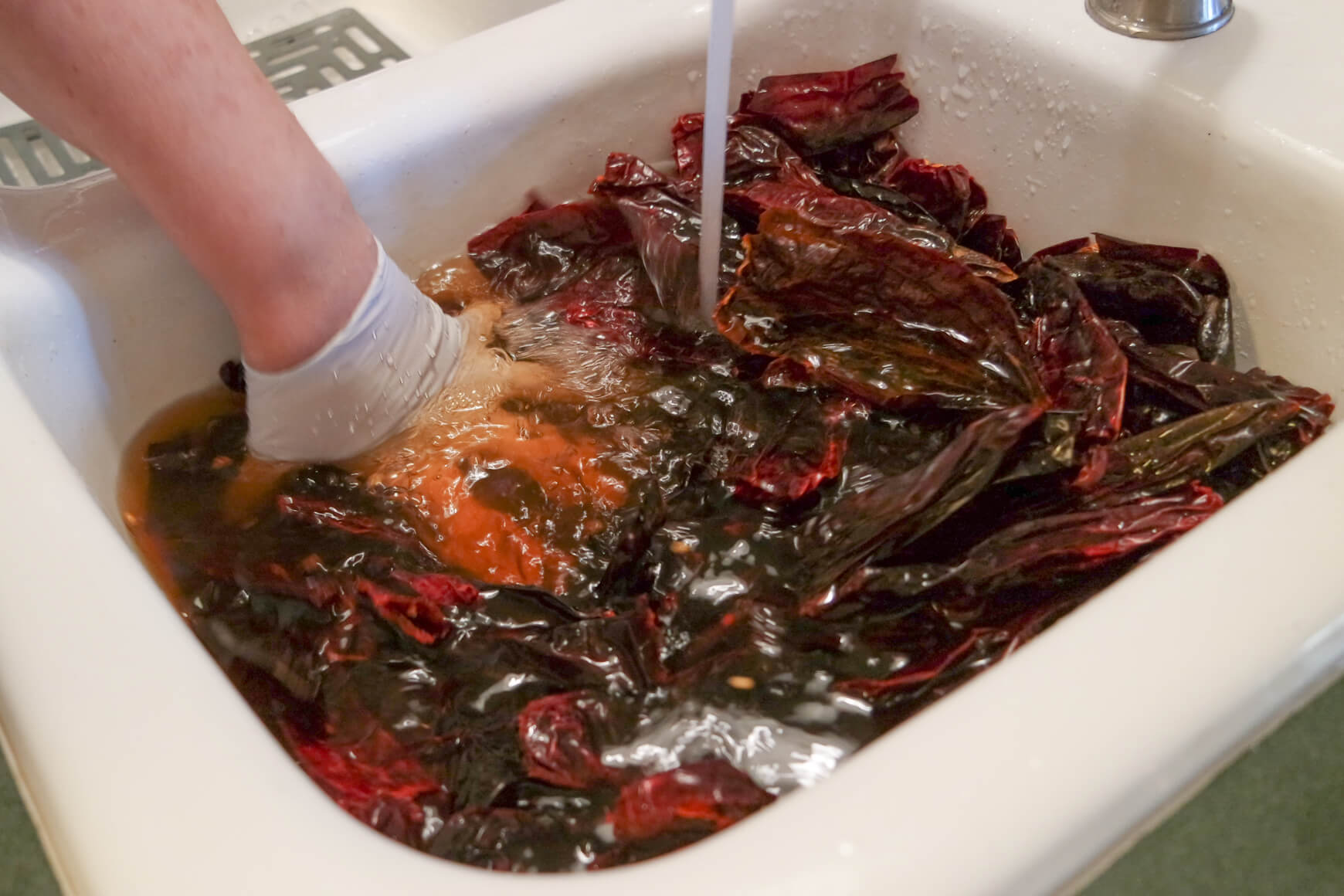 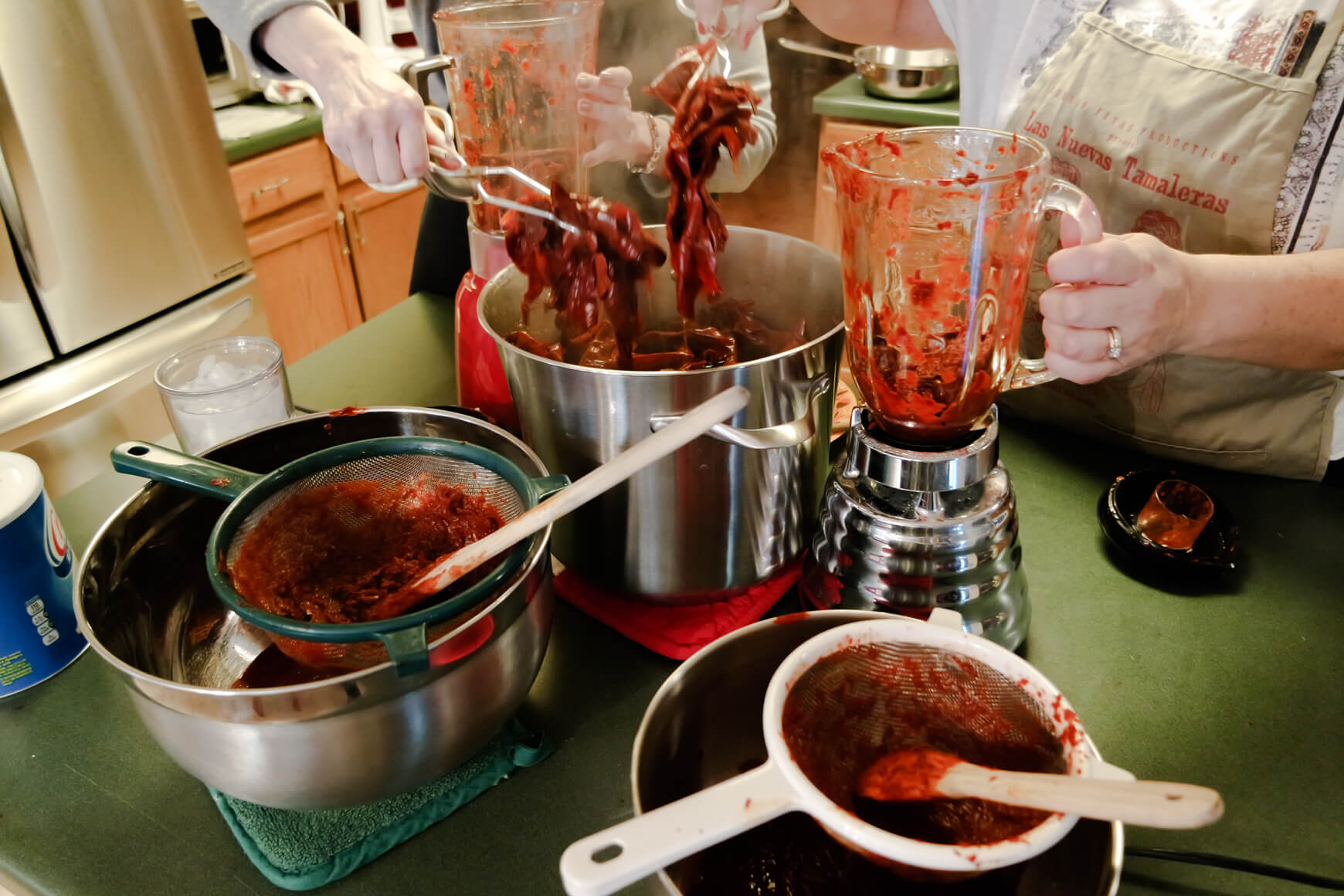 By this stage, we were approaching noon, but the smooth salsa still had a step or two until completion. Whole cloves of garlic are fried and then removed, to make the oil fragrant. A small amount of flour is whisked into the oil, along with salt, oregano and the reduced chiles. The whole mixture is then simmered for 15 minutes before finally being poured over the shredded meats and combined well, essentially creating Chili Con Carne (no beans, this is Texas!). Finally, the tamal filling is ready. Monica knows she’ll likely have extra masa and husks once this mix runs out, so plans to prepare green chile cheese tamale, too. 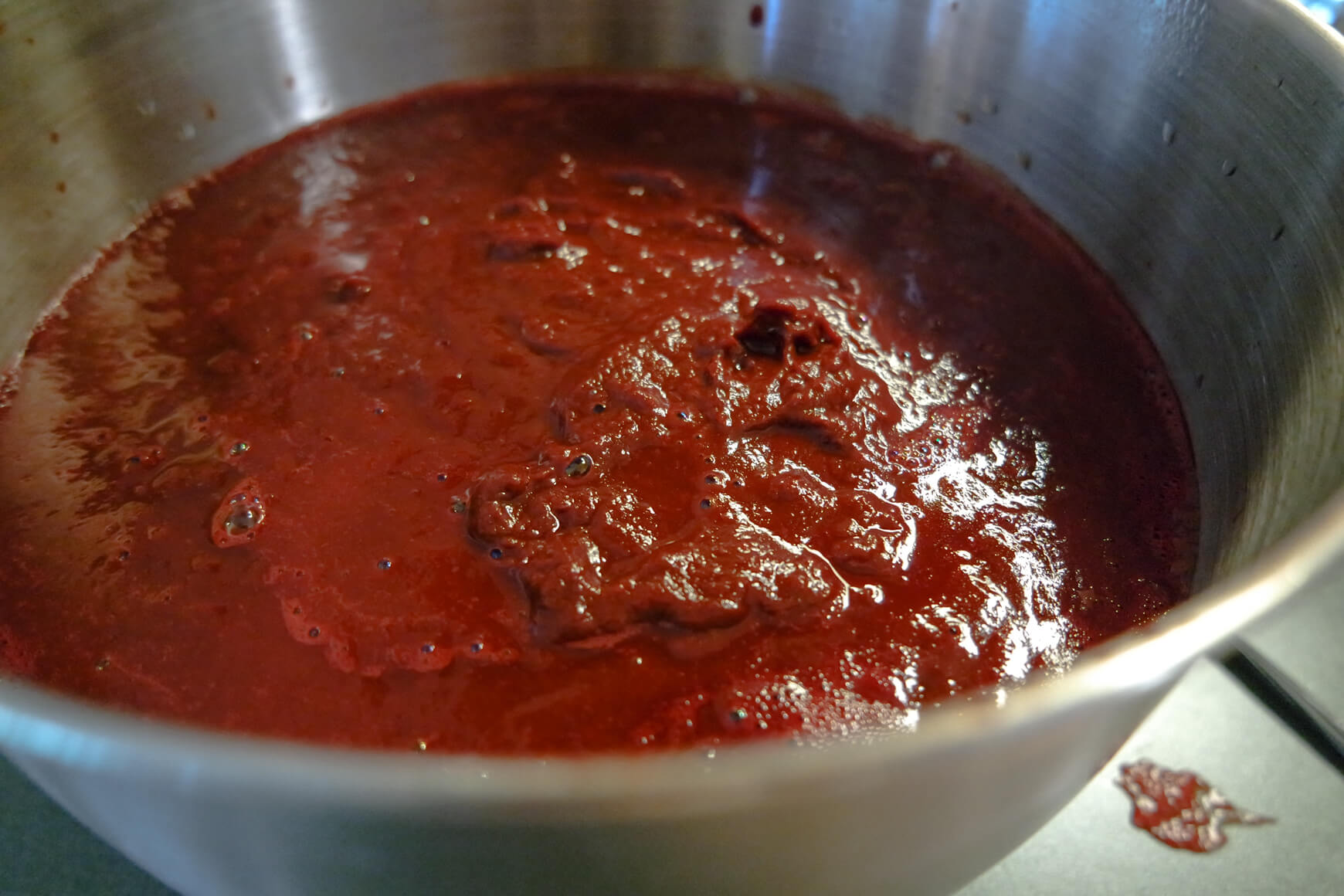 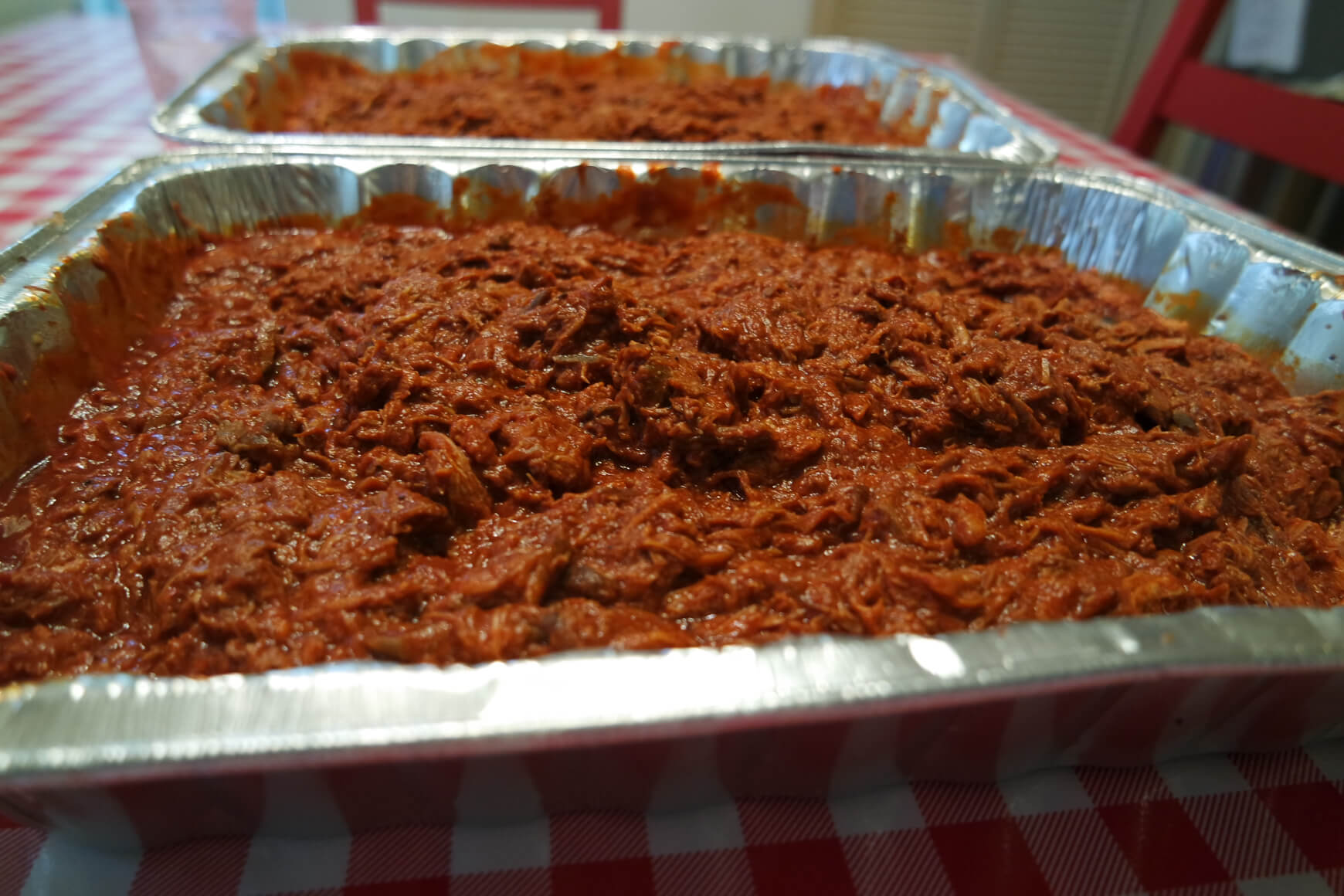 It’s time to make the masa. Over this years, this has become Gary’s specialty, and he’s increased productivity on the masa making by using an electric stand mixer. Since it’s my first time making tamale, the LeRoy’s insist I have to experience the tradition of preparing the masa by hand. Thankfully, they allowed me to just make a small batch, rather than enough masa to make the fourteen dozen tamale they were planning to churn out that day.

As a kid who really liked to mess around with play-doh, this was actually a really fun job! The raw masa is combined with whipped Crisco (though lard is more traditional), salt, baking powder and a little of the leftover juice from either the meats or the water the chiles were soaked in. You then have to find the right technique to force air into the mix, so that it lightens in color and puffs up slightly in volume. The finished mix is airy and light, but the best way to test is with the water drop method.

Periodically, a tiny piece of masa was taken and dropped in a jar of water. If it sank, you kept going, but if it floated, your masa was ready. Our first test sank straight to the bottom, so I continued on making a magnificent mess with the delightfully-squishy mixture. “Oh no! I forgot an ingredient!”, Gary hollered. “Without this it’ll never float!”. He walked to the fridge, cracked open a beer, and gave me a sip. “There. Now you have what you need to make it all come together” he winked. Sure enough, the next test bobbed around triumphantly on the surface of the water. We were ready to assemble tamale. 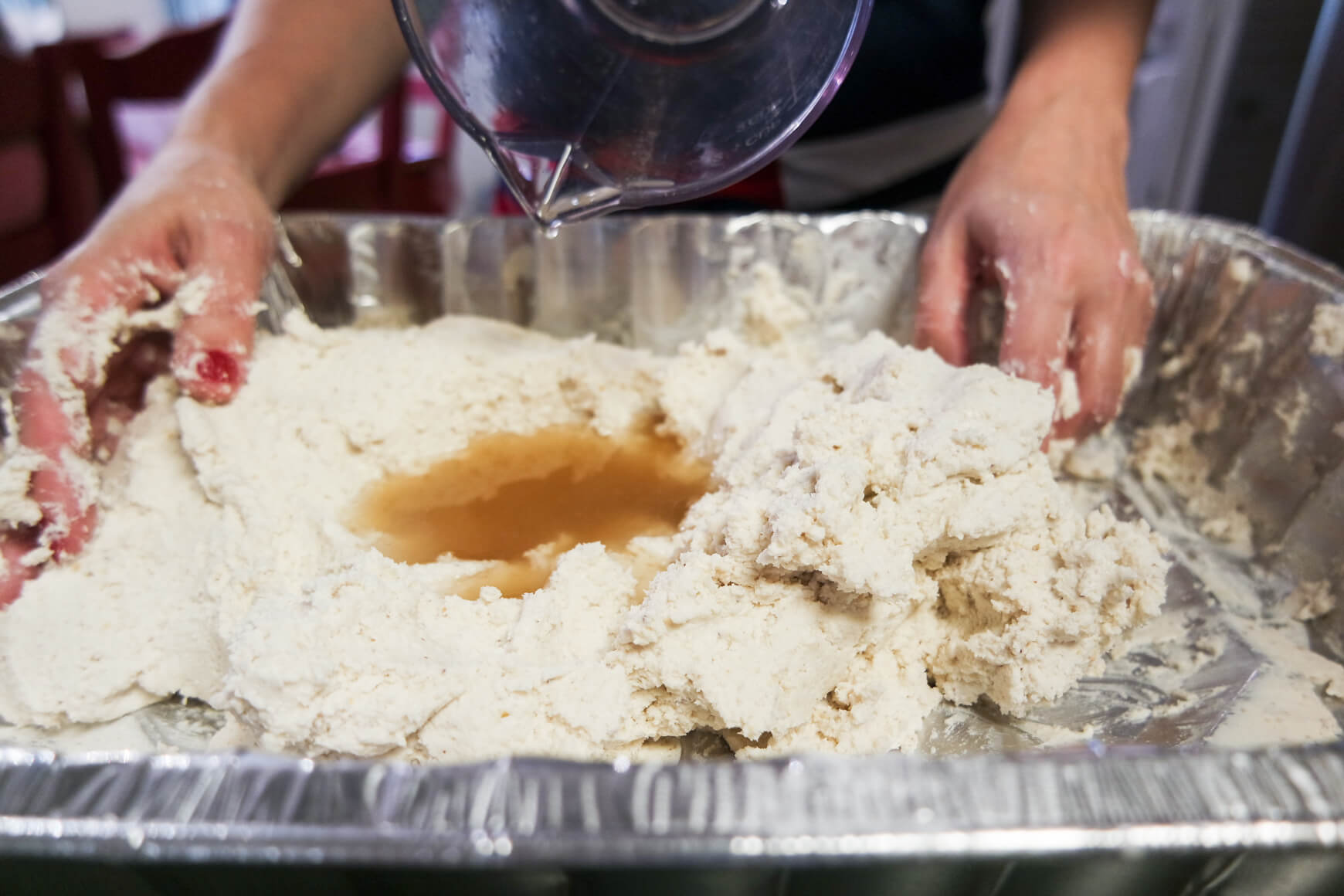 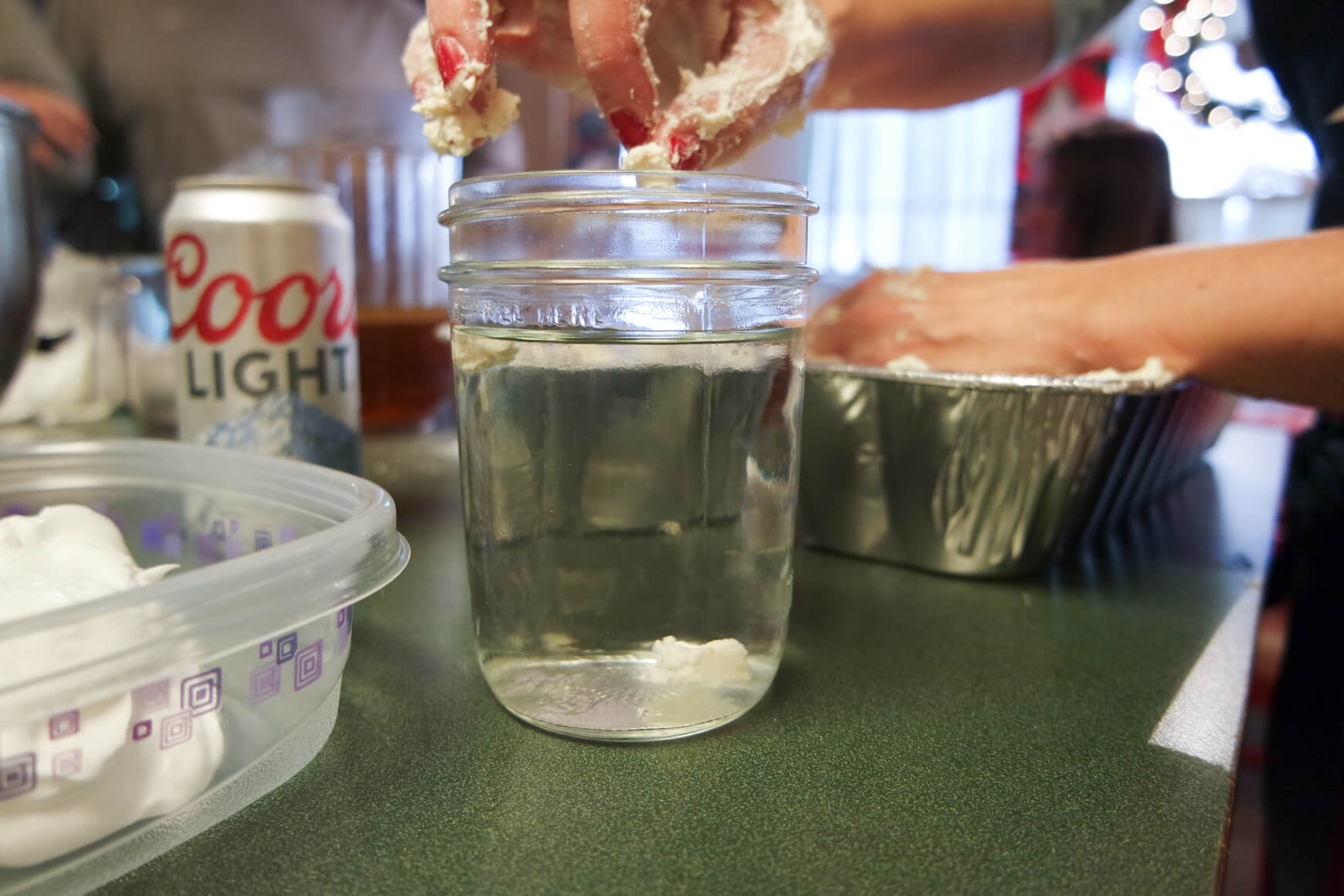 The corn husks had already been thoroughly rinsed clean and left to dry between layers of paper towel. A thin layer of masa was spread over the smooth side of the husk, about 3/4 of the way up. “You don’t want to get it on the rough side, the masa will stick in the grooves and won’t release as easily”, cautioned Monica wisely. She then spooned a small amount of the filling into the middle, and wrapped up the tamal, tucking the end of the husk underneath. That seemed easy enough. Now to do it several hundred more times… 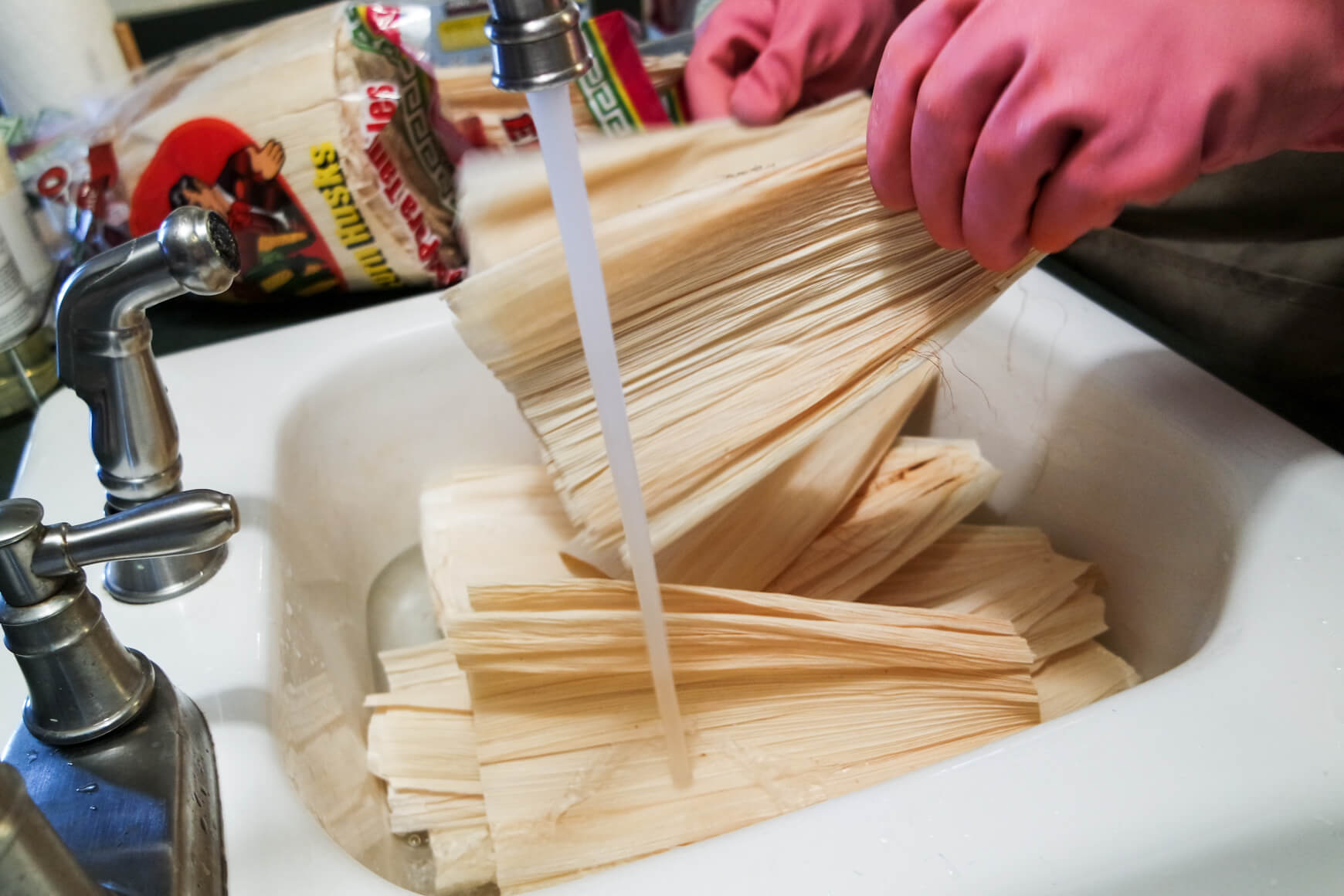 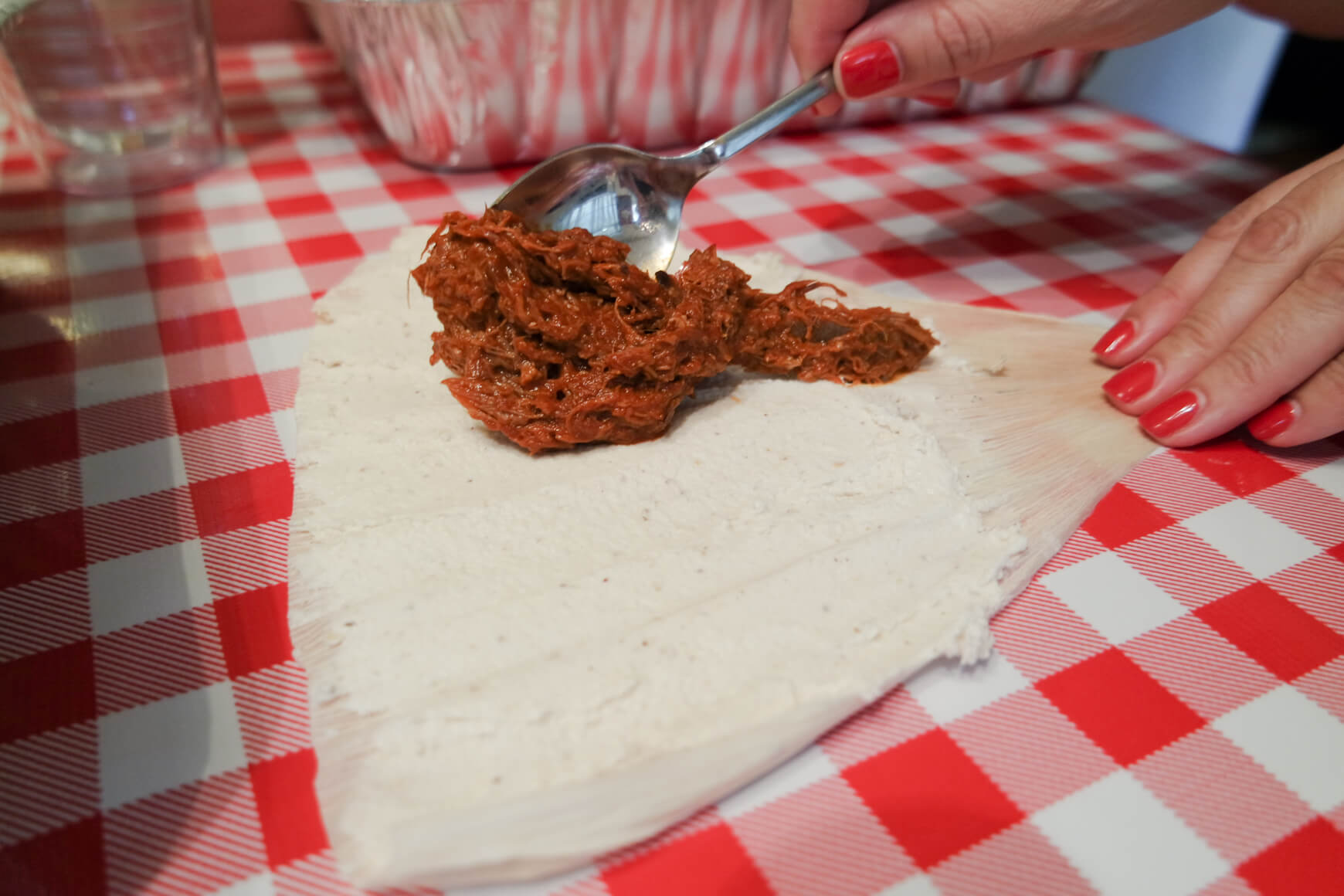 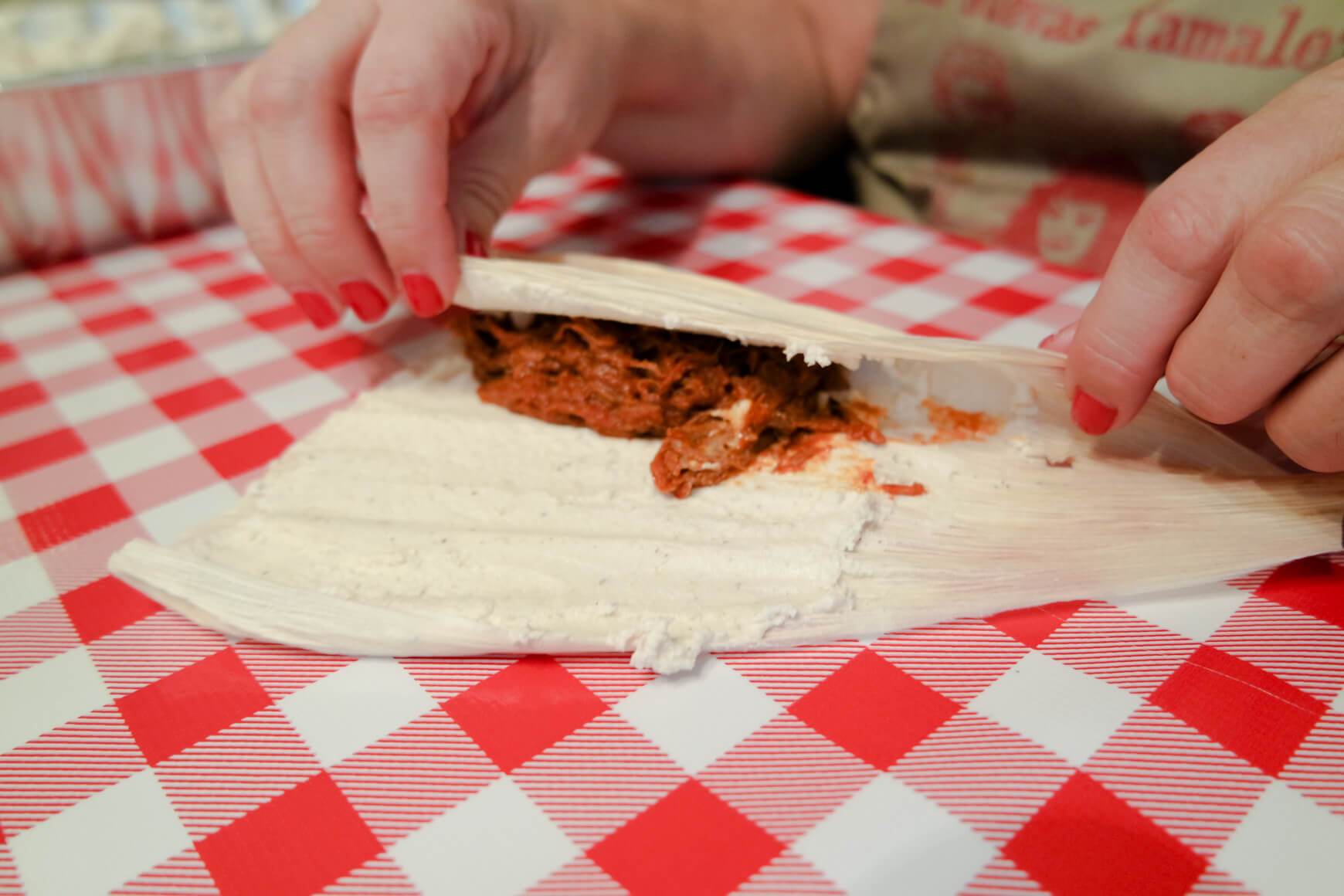 The finished tamale are then steamed in batches for about an hour. Most of today’s efforts will be frozen, uncooked, to be savoured periodically over the next few months. Though of course, each volunteer who pitched in will claim their reward for helping out… 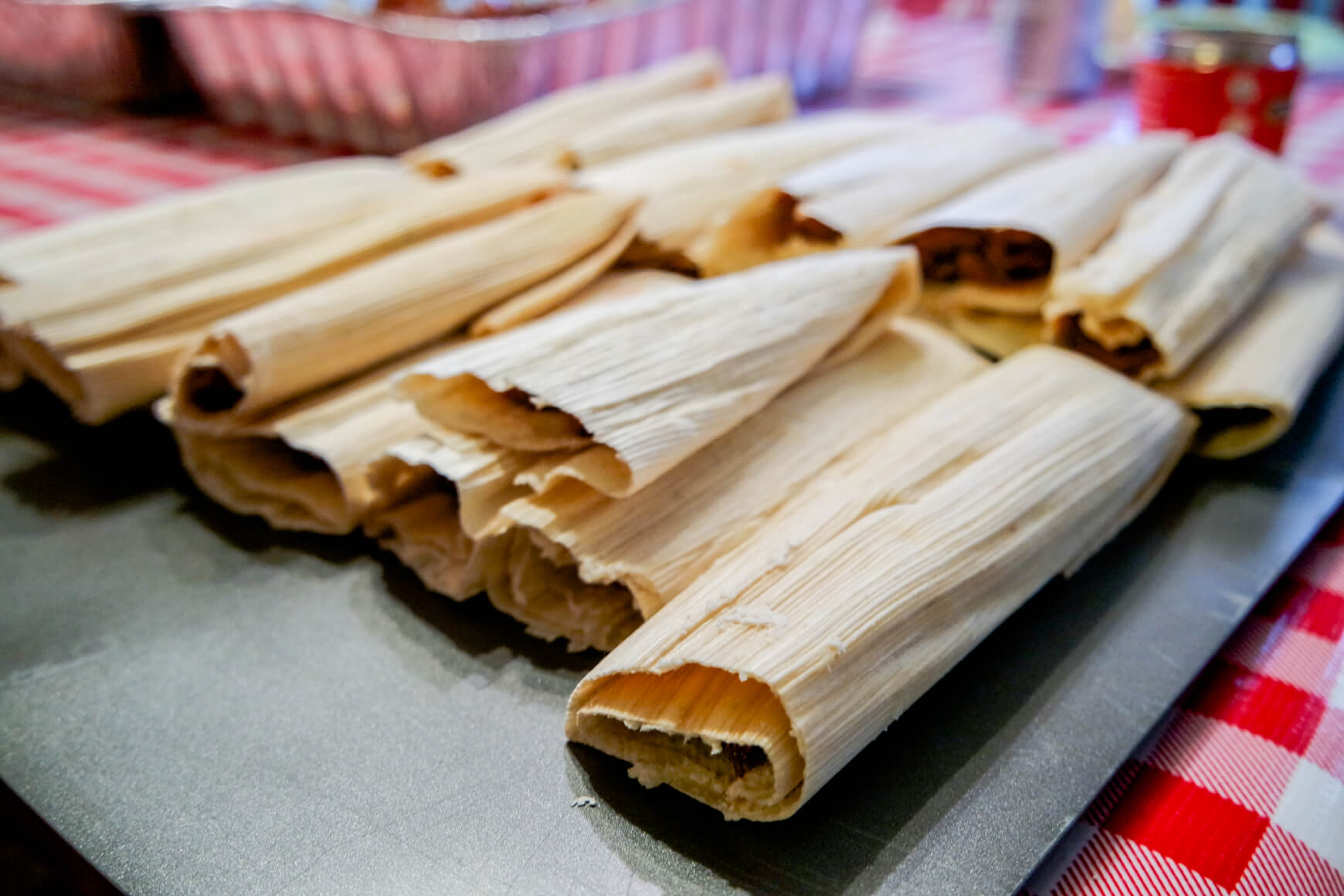 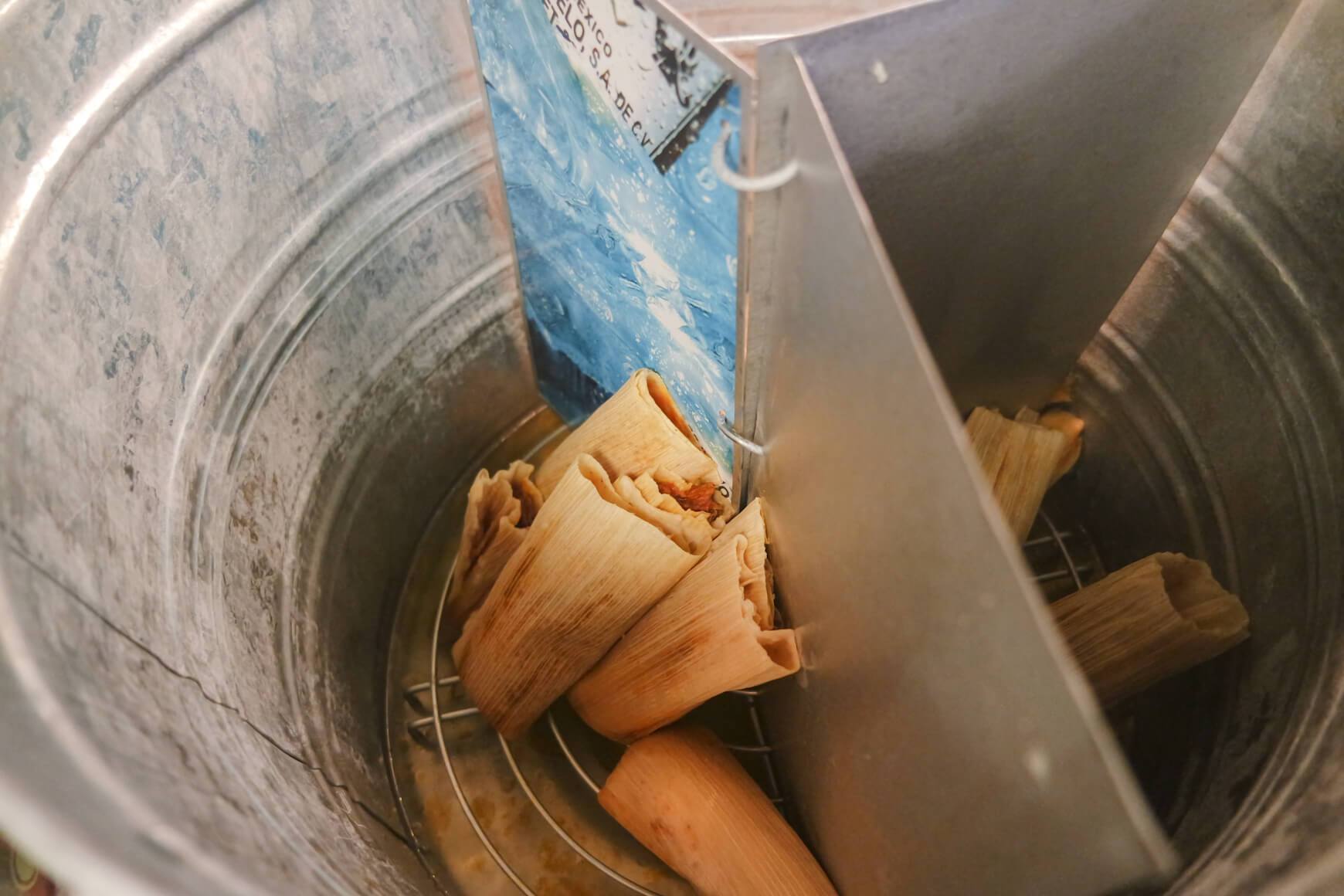 It’s well after 5pm by the time the last batch of fluffy masa is spread across the last husk. Truly, it has been an all day affair. It’s certainly not hard labor, but it is repetitive and intense. Hours of preparation, washing, reducing, refining, mixing, spreading… all for a few bites of masa bundled meat morsels. So I guess it begs the question – is all the effort worth it? 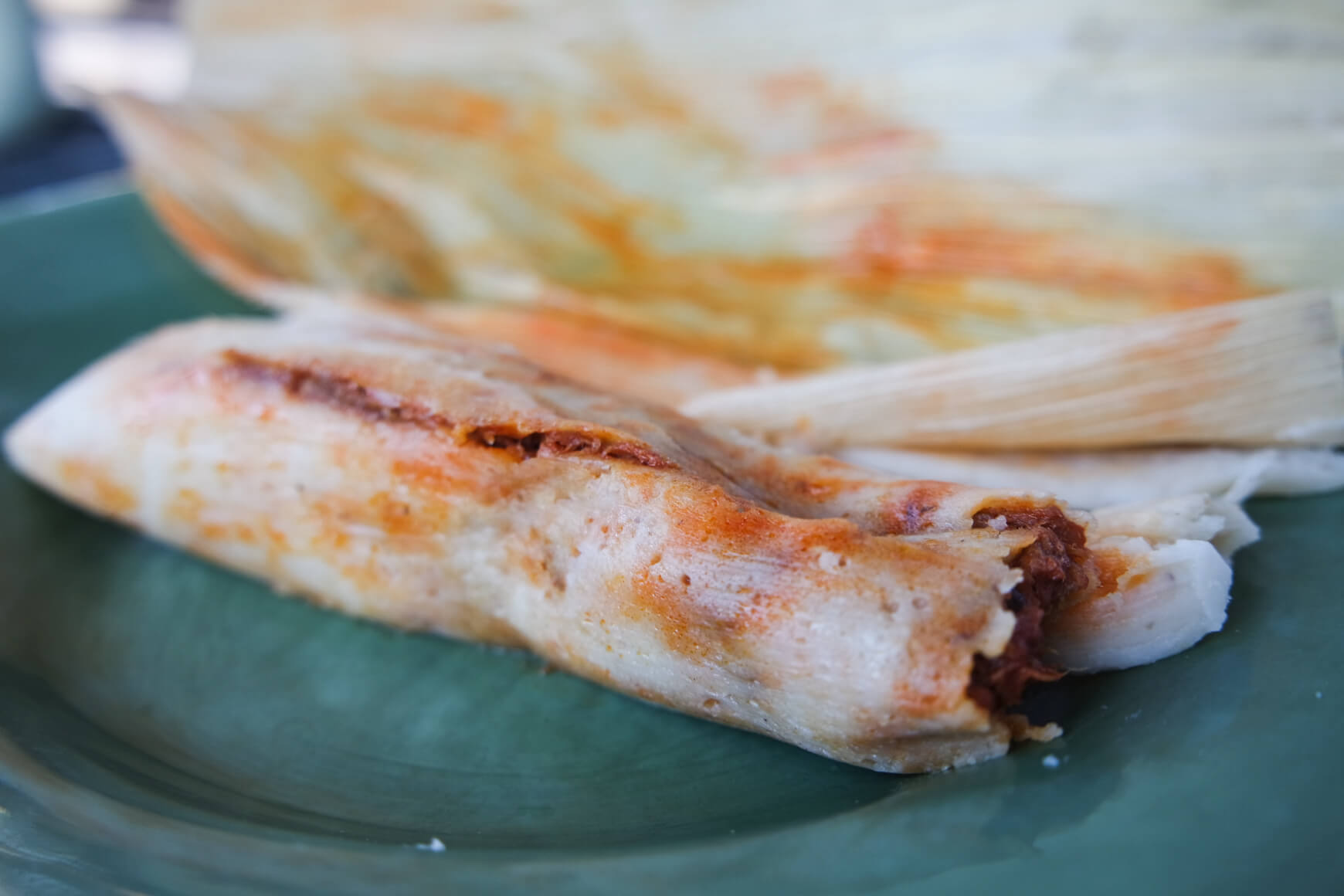 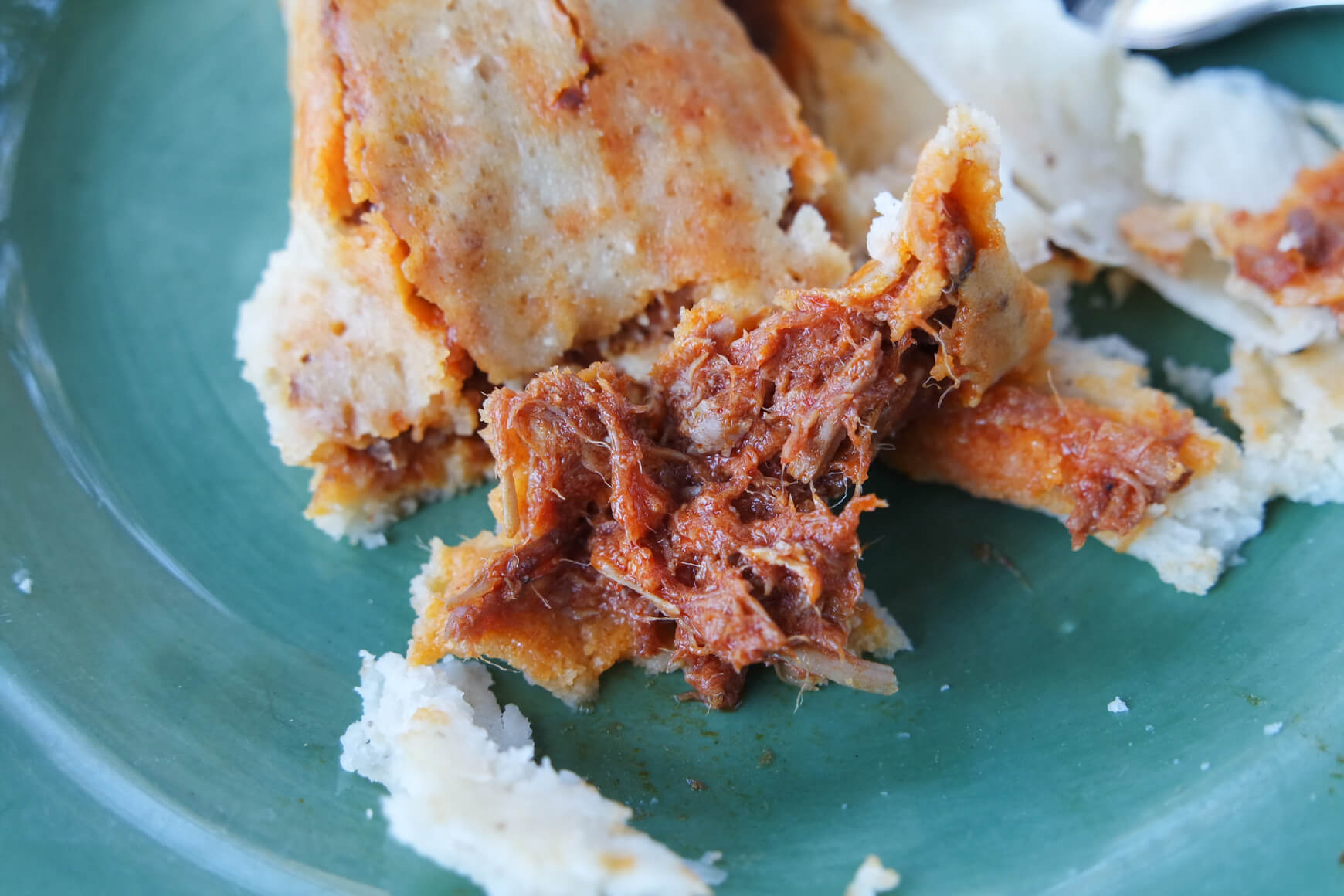