As a proud part of the “We Will Not Be Tamed” crew, which raises money and awareness for Texas Parks & Wildlife Foundation, I’m so thankful to bring you these wild game recipes, all made using deer I hunted & processed myself, right here in Texas. If you’re a young professional looking to get more involved with the hunting and outdoor conservation world in Texas, you might also wanna check out the Stewards Of The Wild program. And so, to the recipe!

What is a gastrique anyway?

The centrepiece of this dish is the venison itself. It’s not covered up by cream cheese or obscured by bacon, and it doesn’t need to be. The meat is the star of the dish, and the gastrique is certainly a Best Supporting Actor. A gastrique is a simple sweet but tart sauce made using sugars and vinegars. It’s beautifully balanced and a great way to introduce fruit flavors that pair well with venison, without having them be overly sweet. If you’re an adventurous cook who like to go off script, you can also easily swap out the blackcurrant jelly for lots of other flavors. Blackberry, apricot and raspberry would work really well as substitutes.

A word about the deer meat.

Yes, I refer to this as venison. My venison is usually from Whitetail deer. For some reason in the US, people are really particular about specifying when they are cooking Elk, or Axis, rather than calling it venison. I often get asked for more Elk recipes, which always confuses me because I have LOTS of venison recipes on here. The thing is, all deer/cervid meat is classified as venison, and when you call out the subspecies, it’s more like just identifying the breed. So, it would be like making a beef recipe but saying “oh, I only have Hereford so I can’t make this recipe that uses Wagyu”. My point here is – you can use ANY kind of deer meat (Elk, Axis, Red Stag, Mule, Fallow, Sika, Sambar etc) when you see a recipe that calls for venison. Glad we cleared that up.

Grill or pan? Either is fine!

The recipe below talks about cooking on a grill – you do get a lovely extra layer of flavor from live fire cooking so if you can grill it I recommend you do. BUT, if you’re holed up indoors and just can’t fire up the charcoal, you can recreate this in a pan/oven, too. Just sear the meat in a hot pan, then put it into a 350f oven until it reaches the desired internal temp as per the recipe.

You don’t HAVE to use twine, but you probably should.

This recipe is for venison medallions, not strips. And to get medallions, you need a cylindrical piece of meat. Though backstrap is round in shape when cut out of the animal (since it’s held in place by the spine and transverse process), it tends to flatten over time, particularly when you vacuum seal it. To counter this, I tie my backstrap as per the recipe instructions. Not only does it make pretty medallions, it actually promotes more even cooking, too. So it’s another step that is not mandatory, but is recommended.

Here are the two most essential items you’ll need for this recipe to work.

First, to get the mega-contrasting crust while still enjoying “medium rare but closer to being rare than medium” venison, you will need a this special seasoning. It’s called Hardcore Carnivore Black, and it has activated charcoal in the rub, which will help build phenomenal color without overcooking the meat within. The second tool is a quality meat thermometer. Sure, you could use a cheap one, but they take a while to give you a reading AND they often display the wrong temperature because they’re not calibrated. And a thermometer that displays the wrong temperature is a redundant thing indeed. I use this Thermapen instant read thermometer. Yes, it’s expensive, but when you consider that it will help you cook EVERY piece of meat perfectly, it ‘s more essential tool than luxury item. 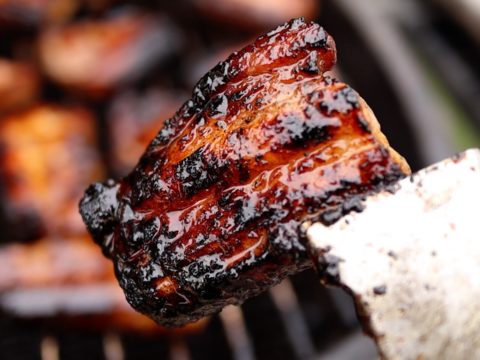 No need to fear - you can totally grill pork belly to perfection without the dreaded flare ups.