How to smoke a brisket (and the answer isn’t a recipe!)

There is no one simple answer to the question of how to smoke a brisket, but these four fundamentals may help you tame one of the most challenging pieces of meat you can attempt to smoke.

At least once a week, I am asked a question about how to smoke a brisket. Sometimes the queries are from seasoned backyard barbecuers, but more often they are from people just getting in to low’n’slow who are hoping I’ll be able to provide them with a nice concise response. Here’s the thing: there is no magical step by step master-recipe on how to smoke a brisket. It simply cannot exist. There are so many variables from meat, to wood, to smoker, to seasoning, that it can’t be condensed to a few basic universal instructions.

But don’t panic, because there are a handful of important guiding principles you can understand to help make cooking a brisket easier.  Disclaimer – although this information will generally apply to all smoked briskets, this article has ultimately been written with Central Texas style brisket in mind. And so, here are my top 4 commandments which are fundamental to achieving a successful brisket cook: 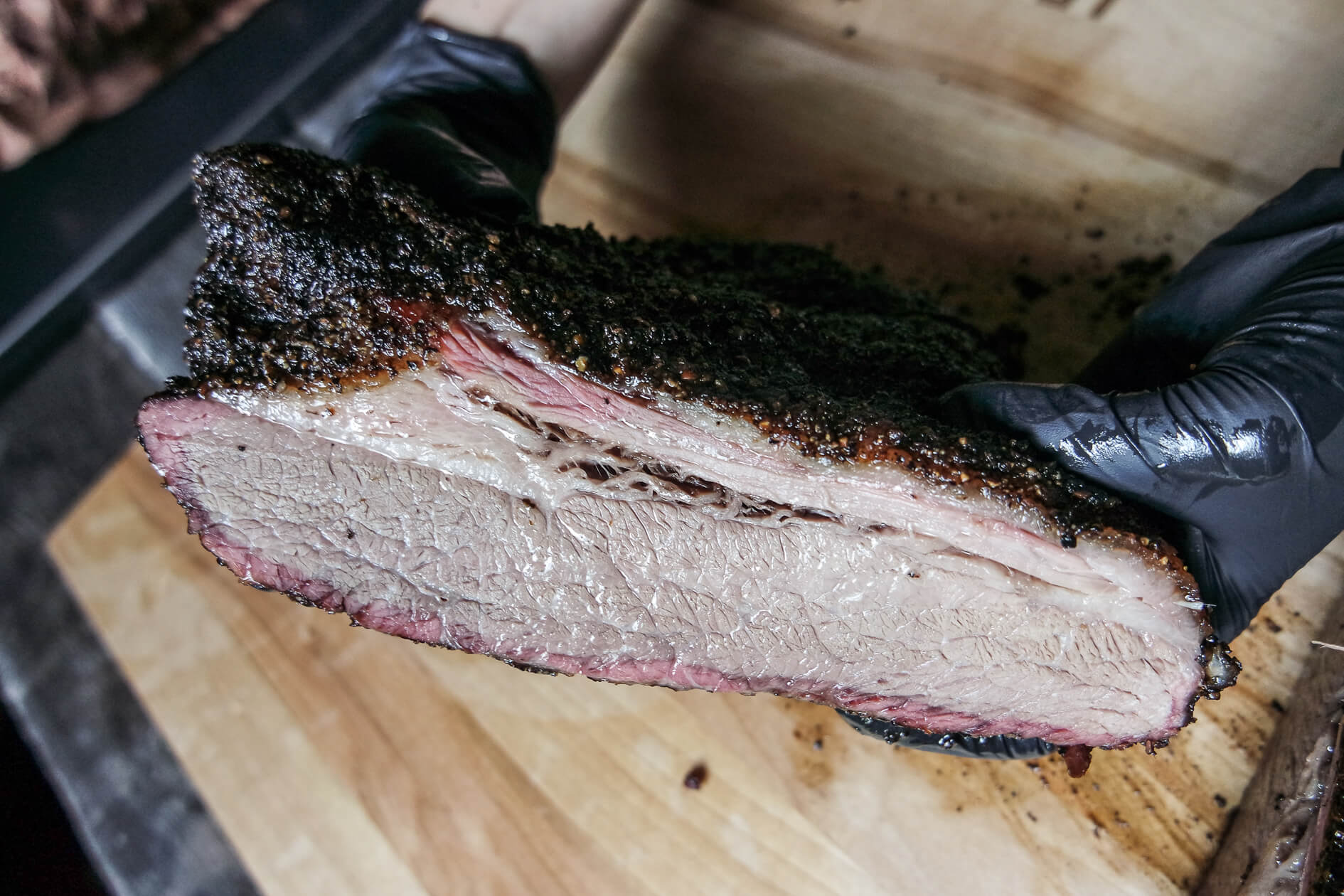 This is, in my opinion, the most crucial aspect of all. If you can’t control your fire and temperature, you will never have a successful brisket cook. That’s why it’s significantly easier to smoke on a ceramic egg, electric smoker, pellet cooker and any unit that has a powered thermostat – the control of the heat is relatively simple and incredibly consistent.

Controlling your fire means avoiding significant spikes or drops in temperature (anything more than 20 degrees fahrenheit). In fact, the old saying “if you’re looking you ain’t cooking” is all about temperature control – opening your smoker too frequently will of course create issues with heat retention. By extension, controlling your temperature also means having a keen understanding of your cooker, such as knowing where the hot spots are and figuring out the “sweet spot” for meat placement.

Let’s talk about a “truck”. One simple word meaning two rather different things, because it can refer both to a pick-up, or a semi/18 wheeler. Why does this matter? Well, it’s going to be damn hard to move a herd of cattle to market in the back of a pick-up! Brisket is similarly confusing, because the one word can refer to several slightly different versions of the cut, and some of the variations aren’t ideal for smoking. What you are looking for is a “packer cut” brisket – a large two-muscle cut with an intact fat cap, that is at least 11 pounds prior to trimming. Generally, the other main version is a lean flat-only cut destined to become pot roast, but if you’d like to learn more about the differences the folks from A&M meat science have you covered here.

Once you have the right cut, you should take into account the quality. The higher grade the brisket, the more marbled it will be. And the more marbled it is, the better your chances of avoiding a dry brisket, and the richer the final taste. This is why Wagyu or Prime briskets are so revered, since they are the fattiest of all.

And finally you should be aware that grass fed and grain fed fats have different melting temperatures, so it’s possible that a fully pasture fed brisket will cook faster than a grain fed. 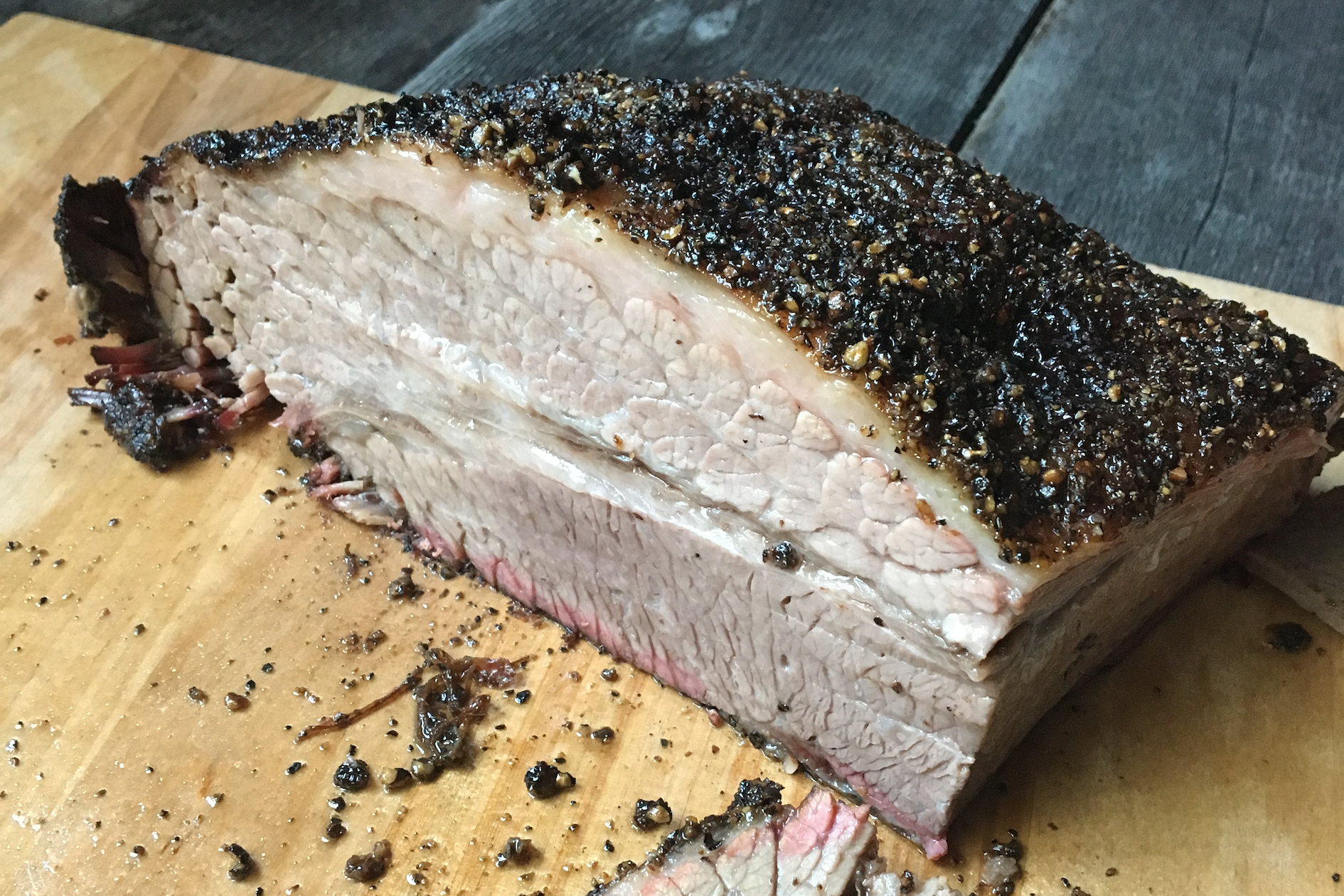 If you ever ask me “how long do you cook it for?”, expect to get the response “until it’s done”. Is it a hot day? Is there rain hitting your smoker? How big is the brisket? Are you having trouble controlling the fire? Are you planning to foil it? These are just some of the variables that will affect the time of the cook, and that’s why you never cook to time.

Even temperature, usually so wonderfully reliable for things like cooking steak, is not always going to dependable when it comes to brisket, so should be used as a guideline not a rule. Brisket can be done at anywhere from 195 to 215 degrees, confirmed by a probe test (sticking a knife or probe into it and getting no resistance). Corey Mikes of Fat Boys BBQ also points out that the lower the temperature you smoke at, typically the lower the internal temperature of the finished brisket (and vice versa).

4. Always rest after the cook.

Brisket is no different to any other piece of meat, and requires resting after cooking. When you rest the brisket, you remove it from the smoker and wrap it in pink paper or foil, which lets the muscle fibers relax and promotes moisture retention.

Most folks actually place their briskets in a cooler or Cambro after cooking, though this is not actually resting, but rather ‘holding’ because of the insulation. This actually has an interesting effect on the finished product, as the brisket continues to cook very gently using it’s own retained heat, which can in fact yield an even more tender result.

Whether you give the brisket a true rest or finish by holding is up to personal preference of how each method affects the brisket. In other words, try each to see which works better for you. No matter which you choose, you must allow the brisket at least an hour to rest after finishing the cook. 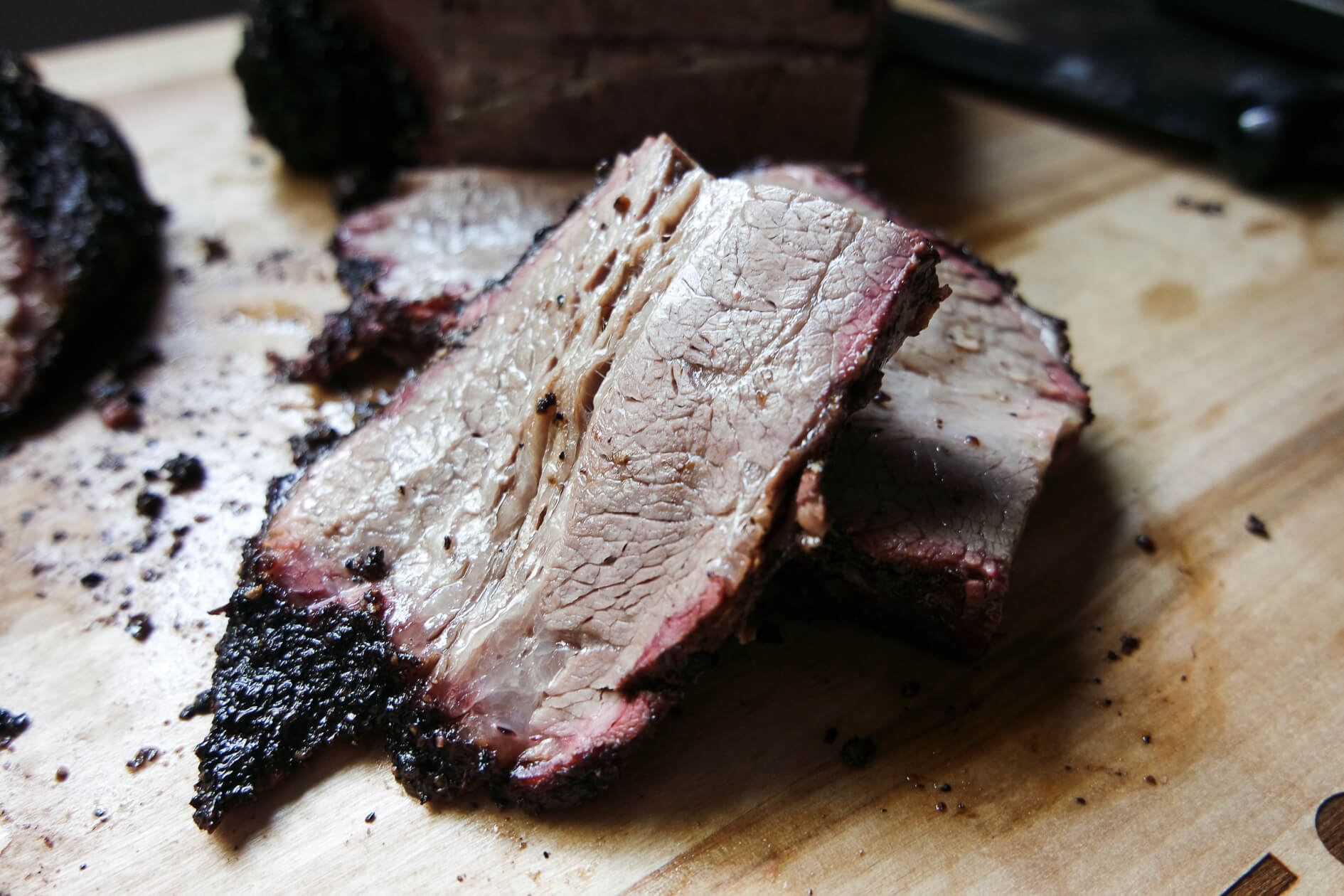 Got the basics? Good. Here are the extra details :

Bark is the desirable exterior crust that forms on the brisket. To create the bark, you need a foundation on which it can form, and the key is the coarseness of the pepper, which is measure by “mesh”. Look for anything from a 10-16 mesh (the lower the number, the coarser the crack), and you can even mix a combination of coarse and cracked for variation.

The type of cooker you use is also hugely influential in creating bark, and without doubt the wood fired offset is the bark king. If you manage to achieve a bark, you’ll want to do all you can to preserve it. Wrapping in porous butcher paper during the resting/holding phase is a great way to keep your bark intact, rather than steaming it back to a mushy state if you wrap in foil.

There is a limit to how much smoke the brisket can actually absorb, and after a few hours many cooks will then choose to wrap the entire brisket in foil, which is known as the Texas Crutch. Wrapping can help with the notorious brisket stall stage (explained by Meathead here), but (no matter how tightly it’s wrapped) it effectively steams the brisket to doneness, and creates a slightly different flavor profile often taking on a “roasty” quality.

Evan LeRoy has introduced the world to a fairly revolutionary “boat” system where the bottom of the brisket is nestled in a boat of foil 3/4 way into the cook, which is really more of a protective measure than a steaming measure. You may also employ “spot” foiling, where you wrap certain edges that seem to be cooking faster than others (kinda like applying a foil patch) to protect them from further exposure to full heat.

You may have read/heard/seen some folks injecting their briskets prior to cooking with anything from stock to bouillon to MSG. I will try to keep any ranting at a minimum, but here’s the bottom line: you do not need to inject a brisket.

Competition BBQ teams inject brisket to boost flavor because judges typically only take one bite of their submissions, and they need to make a big impact. They inject because that’s become competition standard, and that’s what it takes to win these days (which frankly is a little sad, but I guess it’s kinda like putting makeup on a 5 year old to win a pageant…). 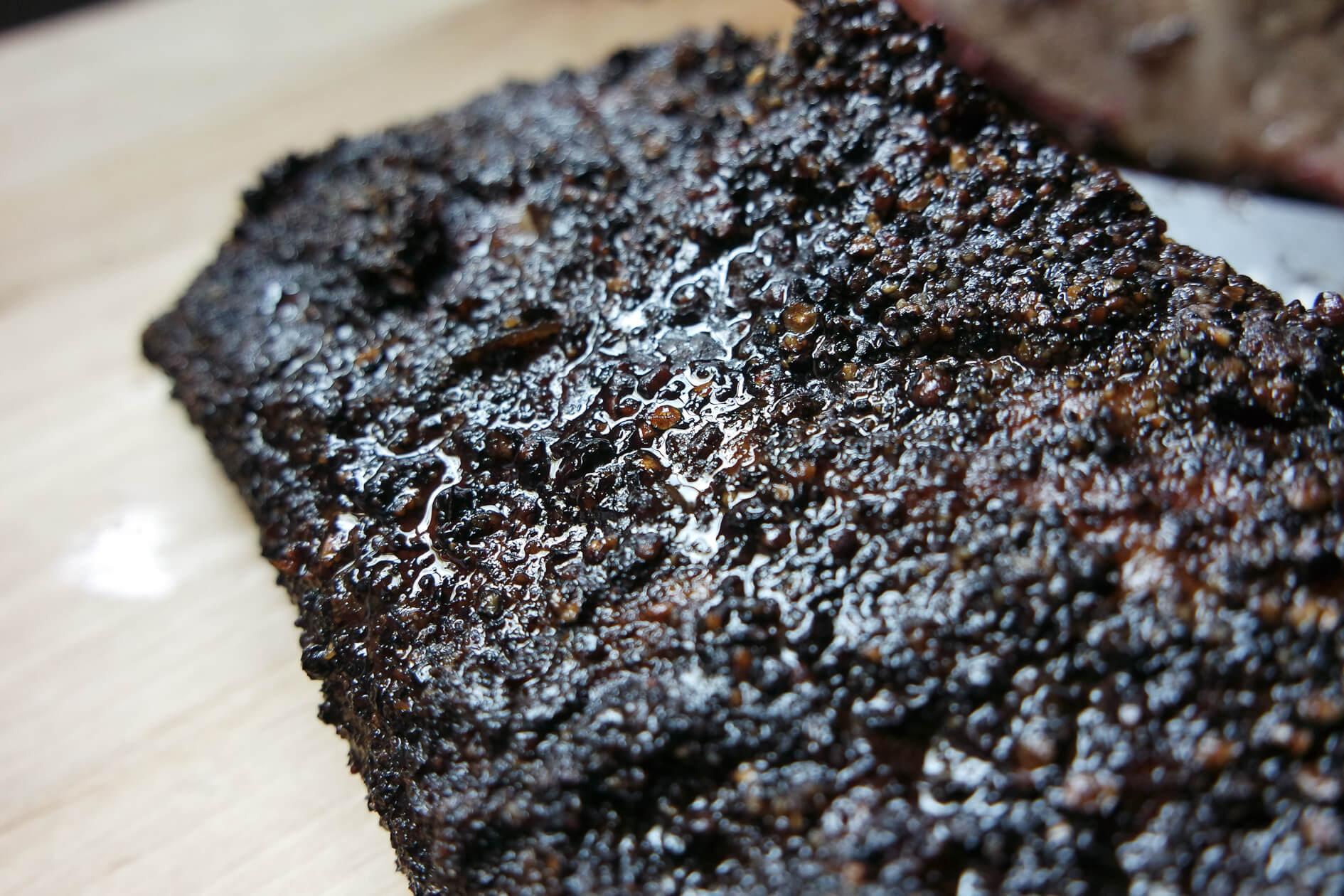 Short answer- yup! If you have read and understand all the information above, you should have a successful brisket cooking experience. That is, you’ll cook a respectable brisket you can be proud of, and can focus your future cooks on dialing in to create your signature method.

From this point, you can start fine tuning to really hone your craft. That may involve moving or turning the brisket during the cook, experimenting with foil, wrapping with peach paper before the cook is finished, exploring the differences in resting time and many more.

Most significantly, continuing to cook will give you experience –  the most valuable tool of all. You’ll learn that sometimes you’ll just get a weird brisket that won’t behave and respond the way you expect it to (hey, its a natural product after all). You’ll get used to dealing with the perils of weather, and learn how differently your smoker runs from summer to winter. You’ll probably also become best friends with your neighbors who keep poking their heads over every time they smell smoke… 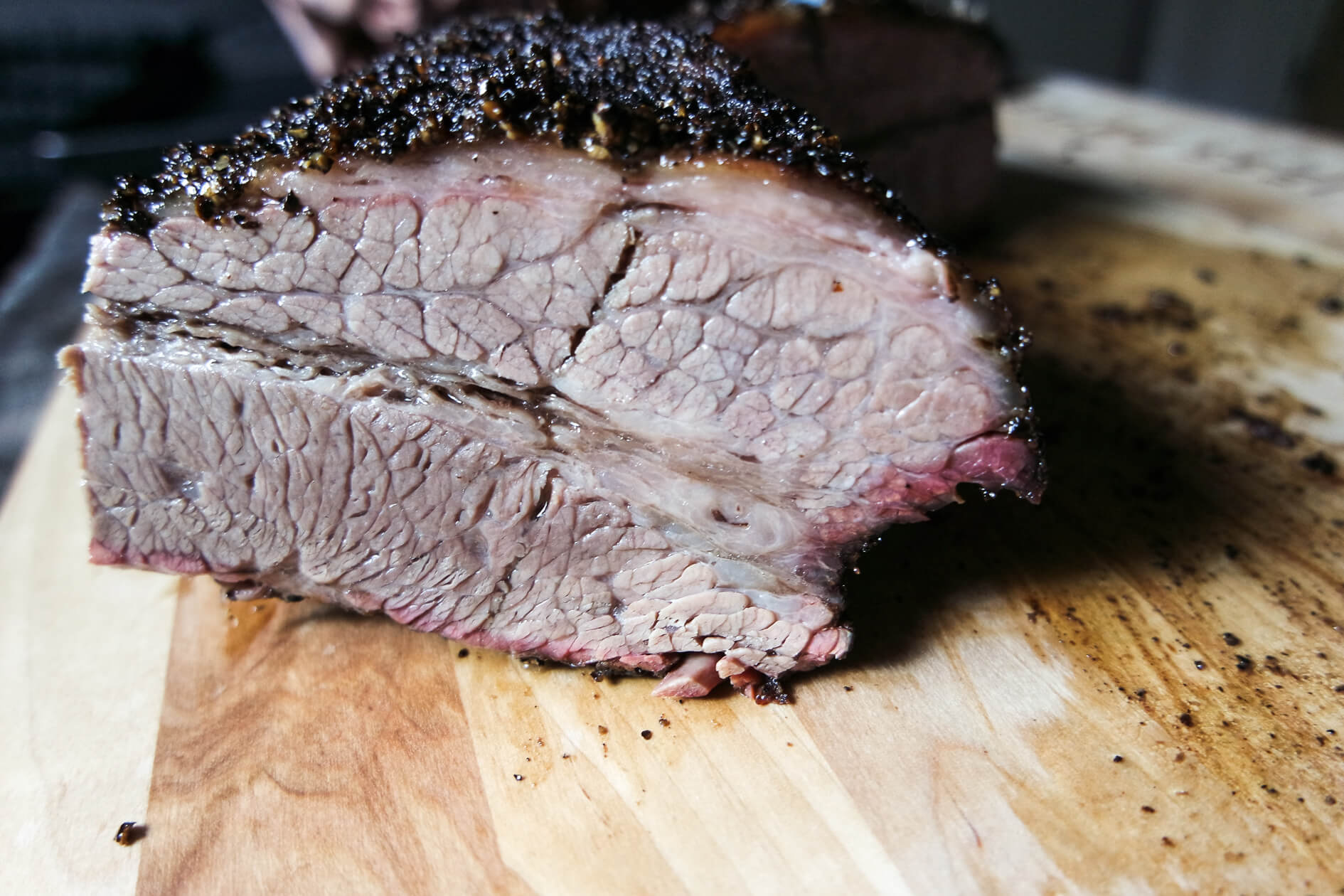 ‘Ok, but, how do you cook your brisket?’

Personally, I prefer the flavor of a brisket done on an offset or log-burning smoker (and yes, I can taste the difference, nearly all the others will have varying degrees of a roasty profile).

I cook my briskets at 250 degrees or thereabouts (cooking them a little hotter helps avoid the stall, which is more likely to occur when cooking at 225). I don’t believe there is any detriment to cooking at this slightly higher temp, so why not make it easier on yourself? I generally don’t bother checking them for doneness until they’ve hit at least 203f, despite the chance of them being ready earlier.

The traditional Central Texas style is to season a brisket using only kosher salt and coarse pepper. Most cooks will now throw in a little garlic powder too. No mustard, no pickle juice, no seasoning salt – do you really think you’ll taste the flavor of half a cup of pickle juice by the time the salt, smoke and beef fat have attacked your tastebuds?

But, my real hack for seasoning brisket is to use my Hardcore Carnivore Black rub. It’s got a coarse grain to help your bark set up, a killer color and it tastes damn good.

And finally, I smoke with post oak wood which is most commonly used in Central Texas style BBQ. I prefer the flavor over mesquite or hickory – it’s somewhat neutral but still subtly fragrant.

Whatever you are cooking on, and whether you’re more excited to eat the point or the flat… happy smoking and good luck!

How to smoke a brisket (and the answer isn’t a recipe!)

Luscious melted brie, rich lobster meat and the unmistakable taste of the grill makes for a luxurious hot grilled dip. 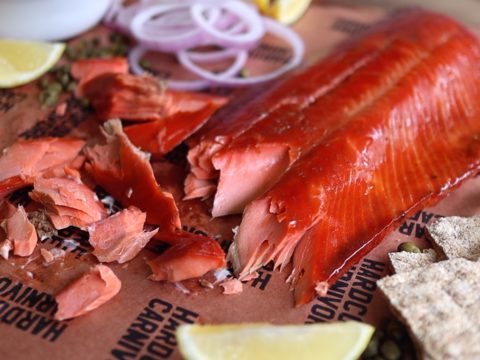 How to make easy hot smoked salmon (with maple glaze!)

This recipe has a two hour marinade and a two hour cook time, a fast and tasty alternative for beautiful hot smoked salmon. 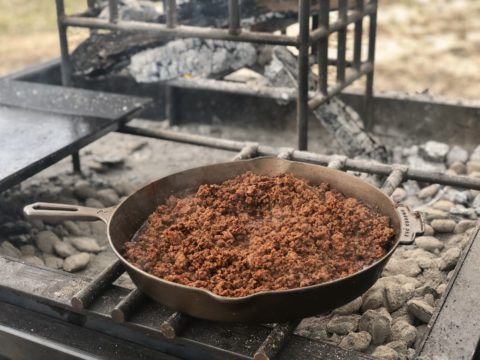 Rich with smoky chili notes and a vivid red hue, this beefy version of Mexican chorizo will become your new go-to breakfast meat.