Juicy pieces of steak in a honey bourbon glaze will have you reaching for more than just one bite.

Steak tips are a bit of a misunderstood cut. In that, it’s pretty confusing as to which cut constitutes ‘steak tips’.

If you google steak tip recipes, you’ll find many recipes from food bloggers who recommend you buy a whole ribeye and cut it into chunks – and implore you not to do so! It’s a waste of a beautiful whole (and expensive) steak.

See, when you order steak tips in a restaurant, especially if they say Ribeye tips, you’re getting the very tail piece of the ribeye steak. Its actually a separate muscle altogether that runs right along base of the ribeye. Sometimes you don’t even see it at all, depending on how they choose to butcher it. If a meat supplier chooses to cut this ‘tail’ off, they can sell it separately as ribeye tips for a fairly reasonable price. Or sometimes, a restaurant will get an entire sub-primal of ribeye in (basically, a whole prime rib), and butcher it themselves. In this case, they now have this tail piece left, and can use it on their menu. But, it’s not a cut most of the public has access to. 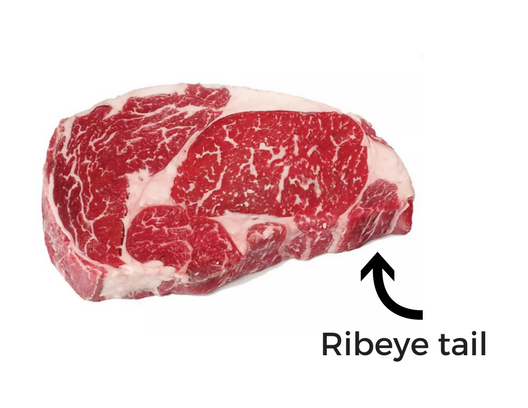 Then, there’s a cut called the Sirloin Tip. It’s not actually a ‘tip’ in that it’s a whopping big chunk of muscle. It comes from the hindquarter and is considered a roast, but more significantly, is quite tough. If you attempted to make ‘tips’ from this larger roast, it’s going to be a very chewy experience, unless you plan to braise them.

Confused yet? I don’t blame you. So while there is not technically any single cut that is universally accepted to be a steak tip, may I recommend you consider the Top Blade Roast? See, when you cut out the membrane that runs through the middle of this roast, you end up with one of the most tender cuts on the whole animal. This magical infraspinatus is extremely economical, and perfect for this recipe.

Confession: I actually did not use a bourbon for this recipe, but rather Silver Star Whiskey, which is distilled in Fort Worth. Through technicality alone, it’s a whiskey, but if you’re a fan of great brown liquors, I definitely recommend you try it!