The king of all steaks is the ribeye cap, or spinalis dorsi. Paired with simple but luxury ingredients, it’s truly a meal fit for a king. 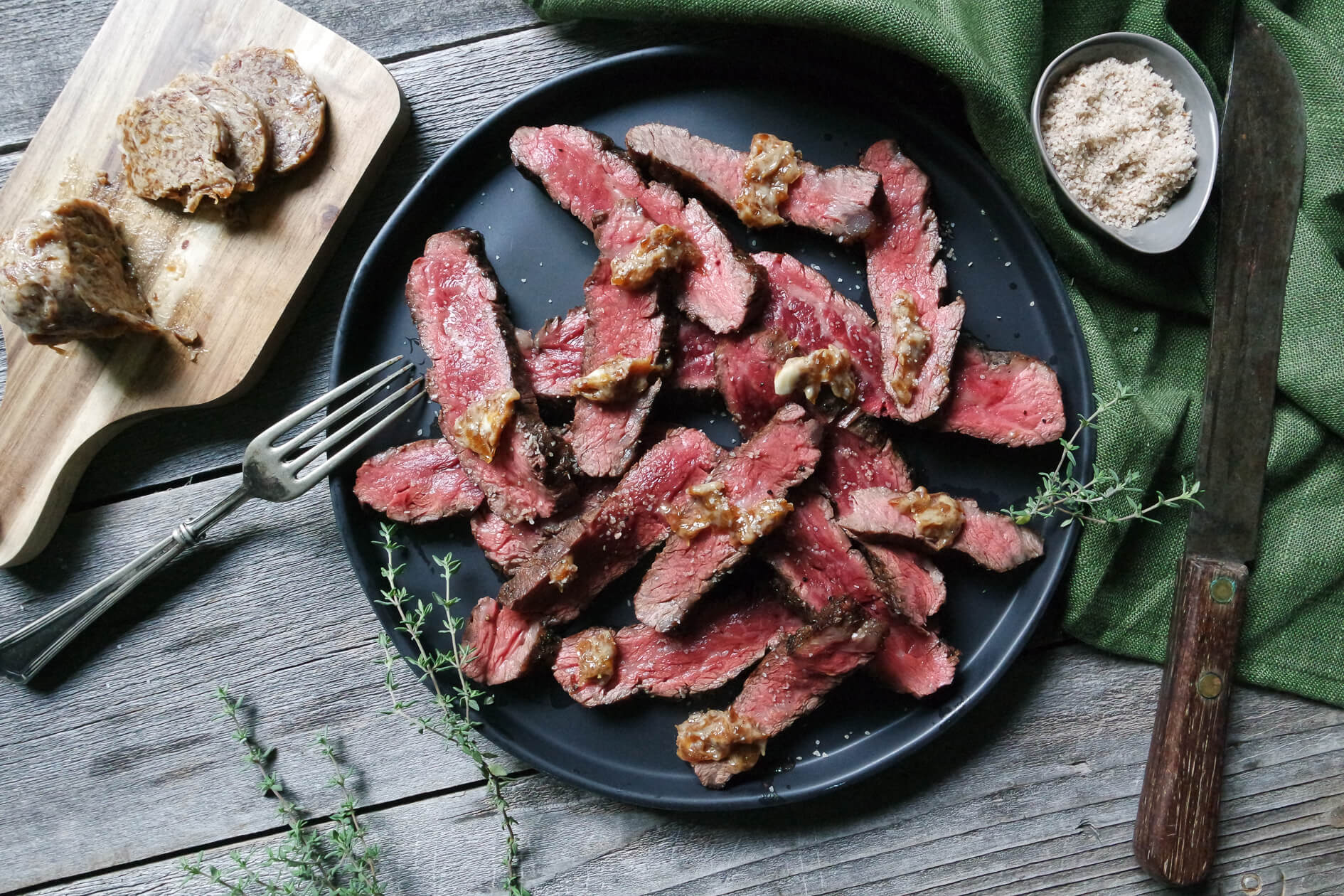 When talking about the Spinalis Dorsi, Dr Davey Griffin, a meat science professor at Texas A&M University always qualifies people into one of two groups – those who eat the Spinalis first, and those who save it to be savored at the very end of their meal.

The Spinalis is perhaps better known by it’s more common name of Ribeye Cap. It’s the part of the ribeye steak that curves along the top. And depending on where along the rib it was cut, it will either be a generous amount, or barely there at all.

This is a great photo demonstrating the position of a ribeye cap muscle on the steak. It also happens to be one of the most generously portioned examples I’ve ever seen! Basically, you want to pick the steak that looks like this from the behind the counter. When separated, the cap is quite thin, similar to a flank or flat iron steak, and needs to be grilled hot and fast. 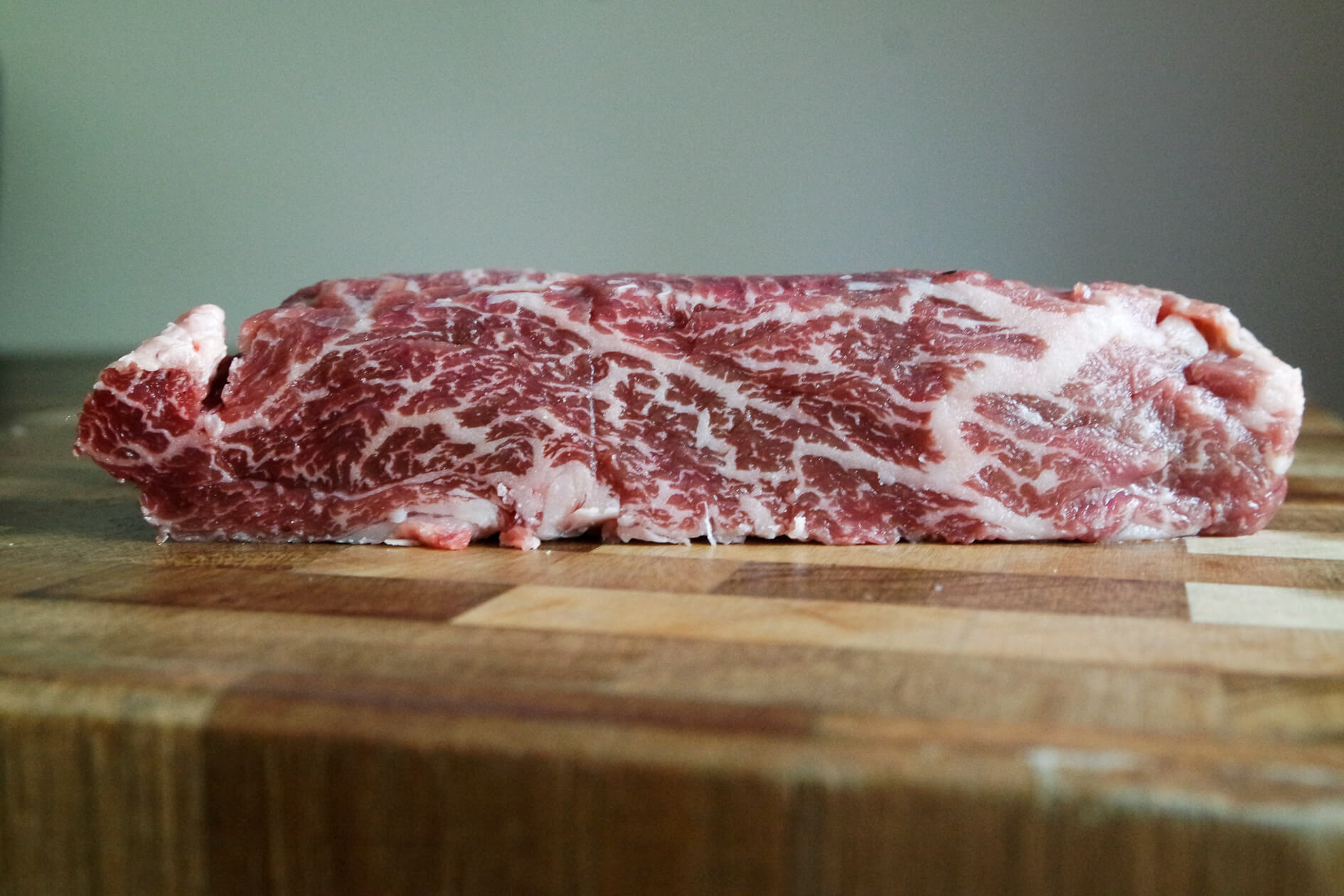 The ribeye cap is significantly tastier than the other muscles that comprise a ribeye steak. In fact, true meat nerds consider it to be THE tastiest cut on the entire steer. The best. The unbeatable. The king. The problem is that in order to get the cap by itself, the whole ribeye steak must be sacrificed, and few places are willing to do that. The folks at Snake River Farms, however, feel that true meat fans should have unfettered access to this phenomenal cut. Thus, the offer it as an entire, intact cap steak. PRAISE THE LARD!

It’s befitting for the king of all steaks to be paired with a few perfectly balanced ingredients which enhance the glory of the cut but know they aren’t the star of the show. Few things can elevate a steak as much as salt and butter. So what if you pimped the salt and butter? Here it is, my friends, the salt and butter combo of your dreams: 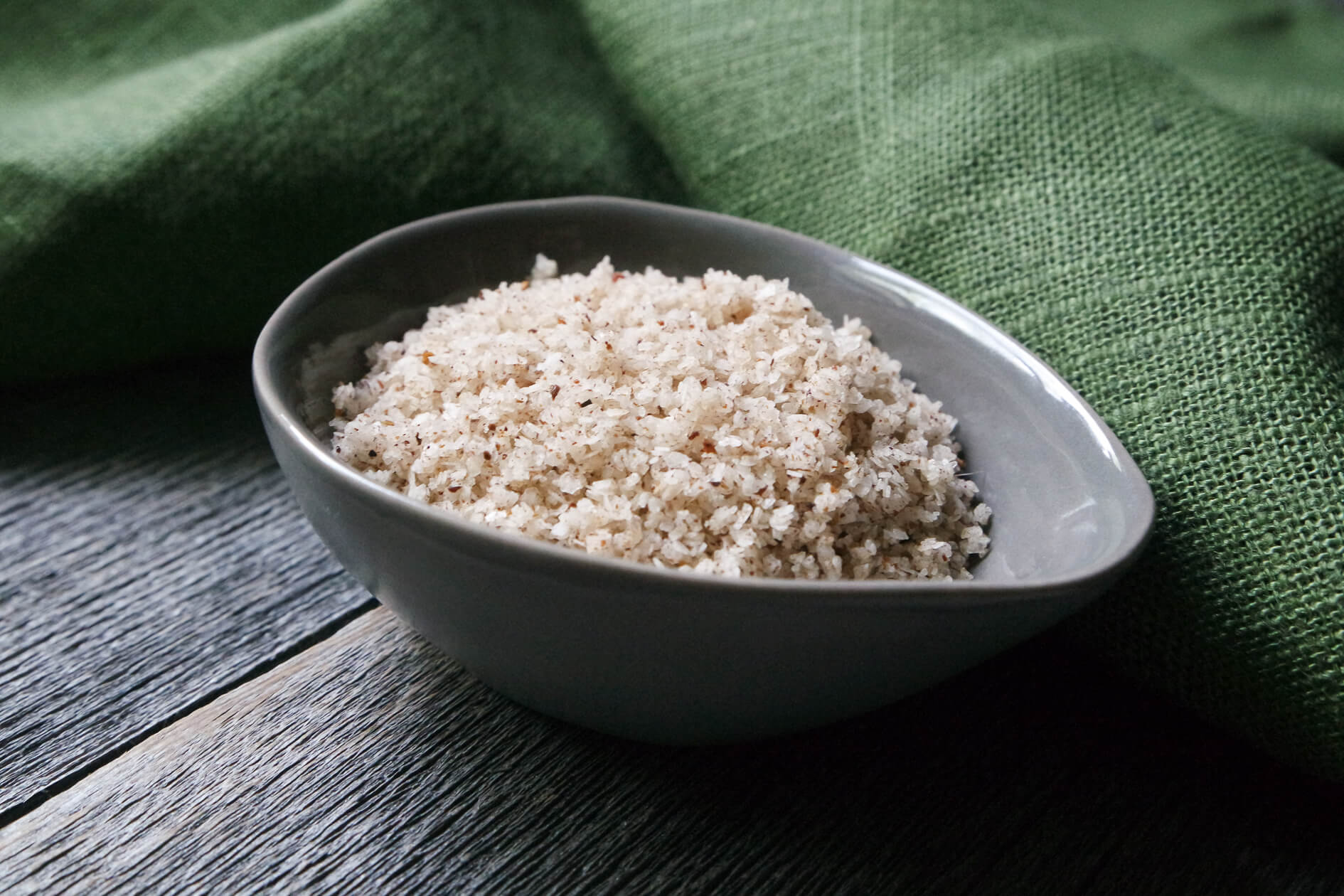 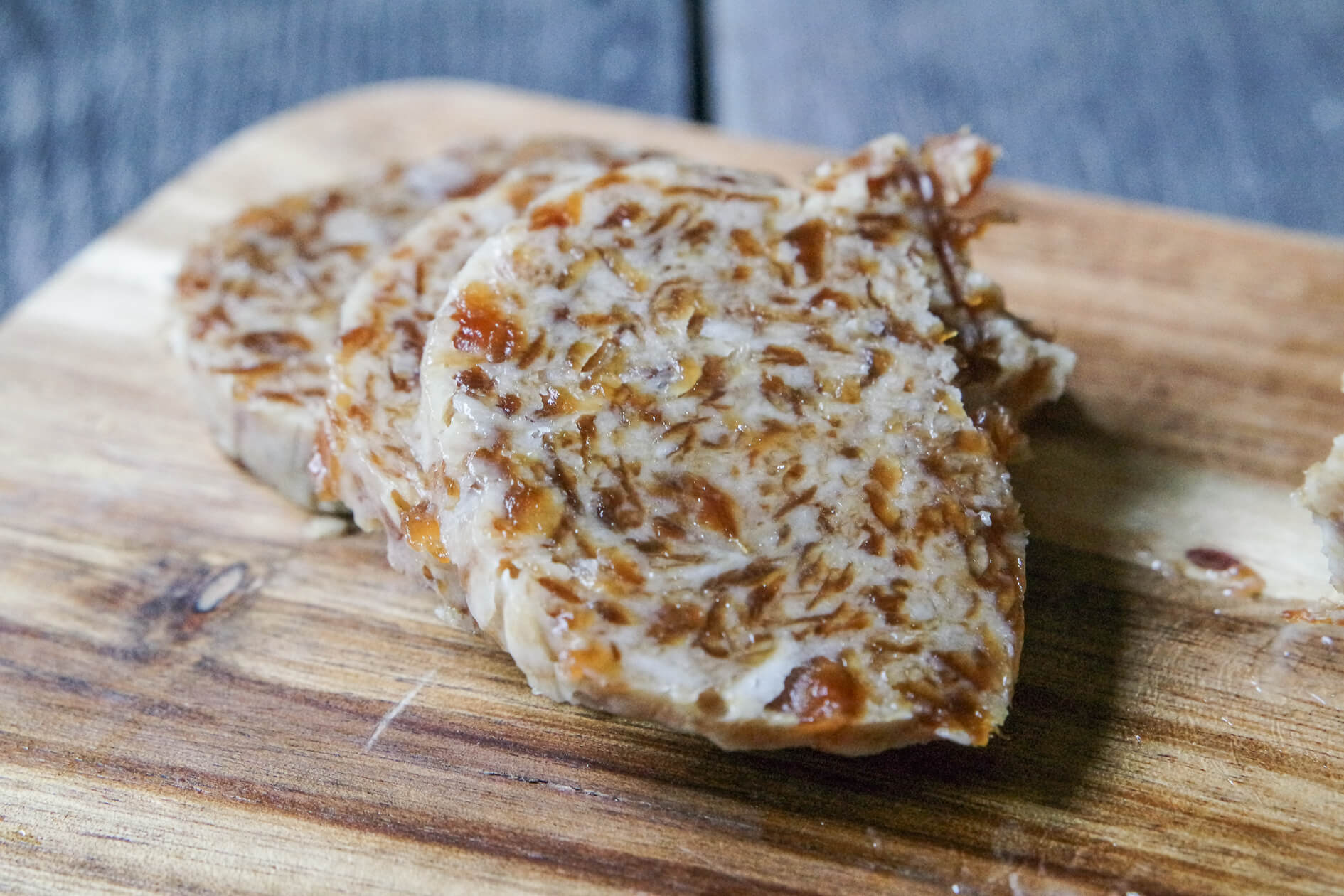 Coarse kosher salt flecked with porcini dust and scented with the most incredible truffled aroma. Not forgetting onions which have been cooked down for a full hour in a pan, only to be suspended in richly flavored Irish salted butter.

Pair it with some simple sides, I promise this will be one of the greatest steak experiences your tastebuds have had to date. 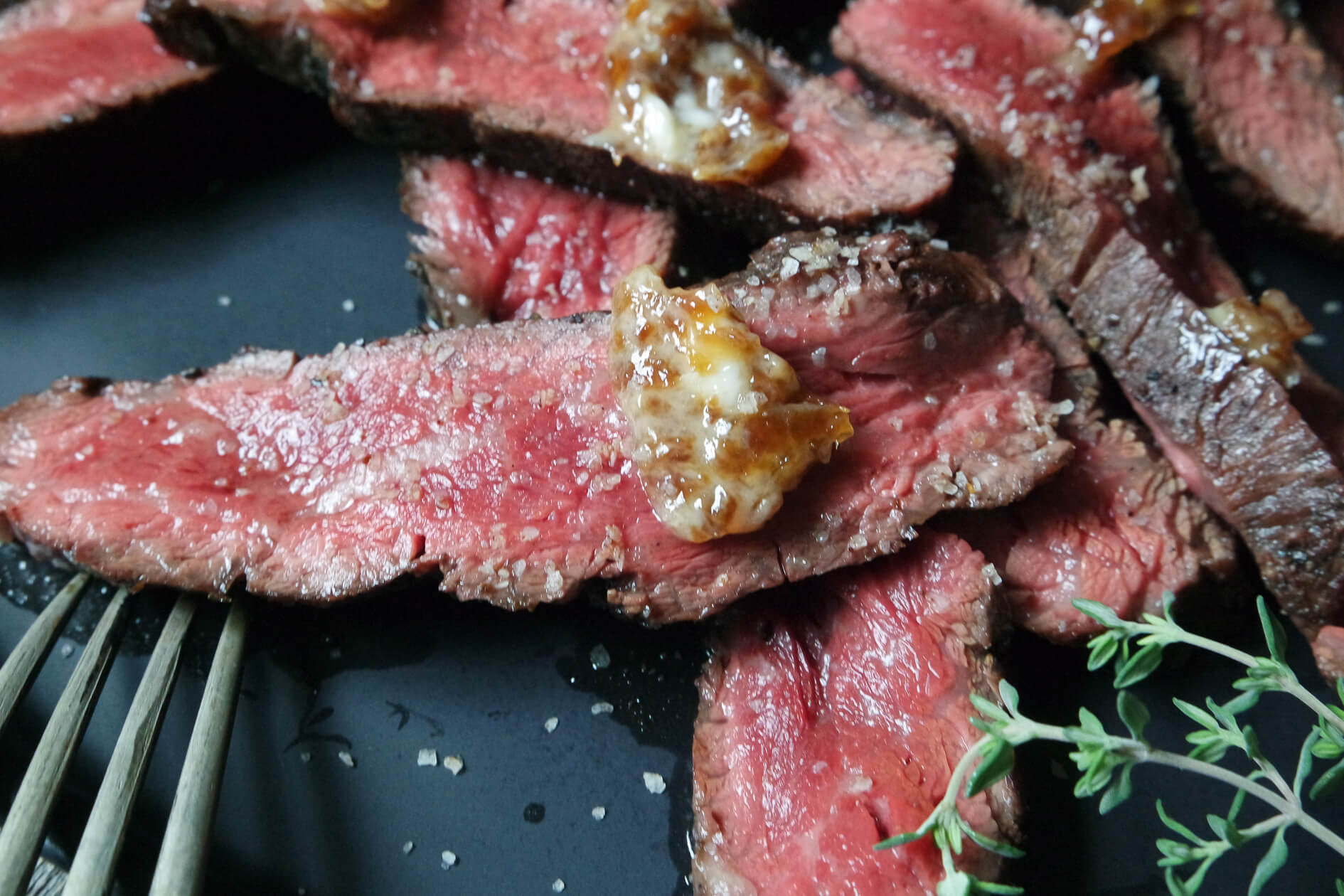 THIS POST IS SPONSORED BY SNAKE RIVER FARMS. SPONSORED POSTS AND AFFILIATE LINKS HELP TO SUPPORT THIS SITE. I ONLY WORK WITH PRODUCTS & BRANDS THAT I PERSONALLY USE OR GENUINELY RECOMMEND.

Serves about 4 people.  The porcini powder is an optional addition to the salt, to give it a truffled appearance. To make your own, use this recipe.