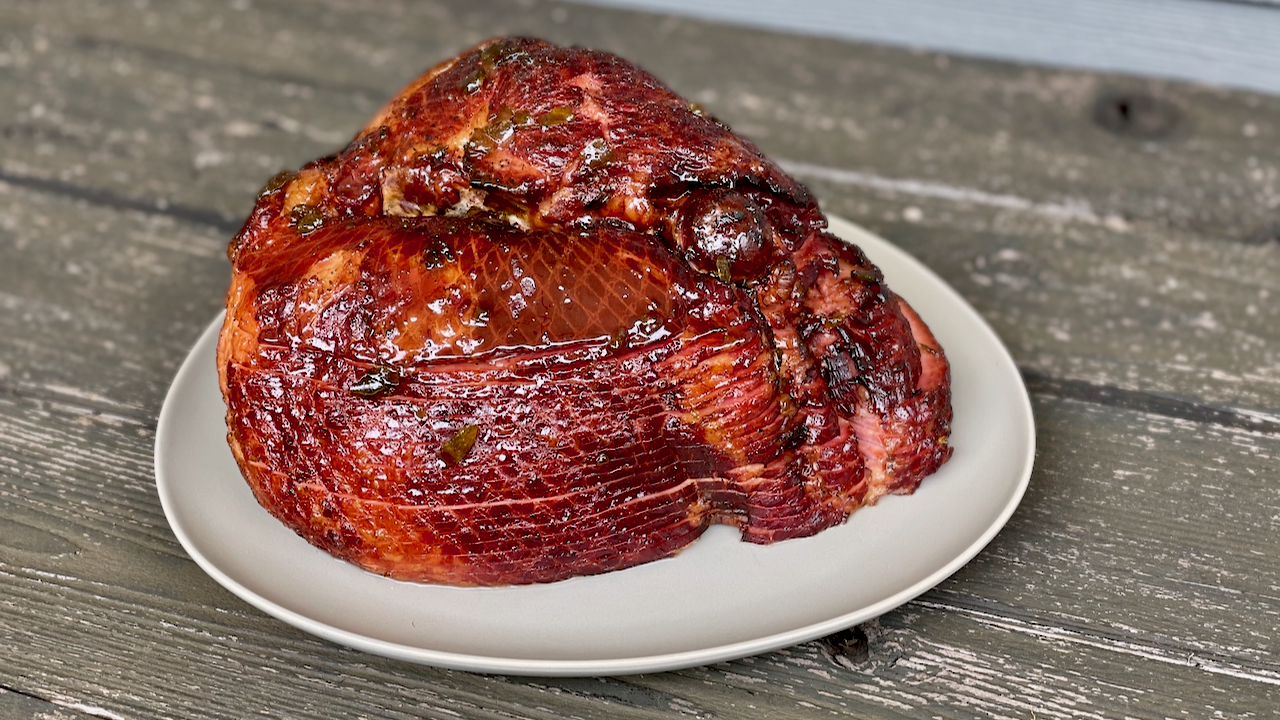 Boost the smoky profile of your ham by double smoking it – it’s not too overpowering and works perfectly with a sweet heat jalapeno glaze.

This is one of my favorite ways to prepare ham, but it comes with a caveat. It’s important to be clear that double smoking is not the best method for achieving maximum juiciness on your ham, BUT the extra subtle smoke flavor is a nice addition. So, in some ways choosing to cook your ham this way is a bit of a trade off. Do you want it smokey, or do you want it mega moist? If you prefer to get the most moisture possible out of your ham, I recommend following the steps below and foiling the ham during the reheating process, then leaving it uncovered during the glaze. The smoke will be much more subtle with this method. You can use any type of smoker for this recipe – offset, drum, barrel, pellet grill etc.

How long do I cook the ham?

Technically, you’re not cooking the ham, just reheating it. Unless specifically sold as a “fresh ham”, most hams are already cured/cooked and have also been smoked. The “double smoke” in this recipe is because we’ll be reheating the already-smoked ham in a smoker! However, it’s still very important to reheat the ham to a safe serving temperature. A general guideline for cooking times is 12-14 minutes per pound, and the ham is ready when it reaches 140°F internal temperature. To measure the internal temperature, you will need a reliable meat thermometer or probe.

Do I need to use a spiral ham?

No spiral? No worries! You can use any kind of ham for this recipe – in fact, a non spiralized ham may even be a little more moist since it will not dry out from all the cut surfaces. Just make sure you cook it until properly heated.

How to make this ham in an oven:

You can easily ditch the smoker and follow the steps below (with some minor adjustments) to prepare the ham in an oven. If you choose to use an oven method, I recommend foiling the pan during the reheat steps) then leaving it uncovered to set the glaze. Obviously, choosing to use an oven means you will not get any additional smokey flavors.

How to make this ham on a grill:

If you prefer to prepare this ham on a grill, simply use the two-zone method to set your grill up with a hot and cool zone. It should still be running at a temperature of 275-300f. You can also nestle some chunks of wood into the charcoal to boost the smokey profile. The ham will be cooked on the indirect side of the grill to simulate the gentle indirect heat of the oven, just with much more flavor!  You can also place the ham directly onto the grate with a water pan added underneath instead of setting it in a pan with a rack.

Flavors and aromatics which you can use instead of chicken broth:

This recipe calls for some broth or liquid to be added to the bottom of the pan. The meat never really touches the broth, its more to provide additional moisture while cooking. Just like a brine, you can experiment with different flavors and aromatics in this liquid. Think: cloves, slices of orange, fresh herbs, star anise, cinnamon etc.  And if you’re trying to keep it as simple as possible, you can always just use water instead.

Where do I get the jalapeño jelly, and why do I need to add extra syrup?

There are lots of great jalapeno jelly recipes online, but since you’re just using it as a pour over, I recommend buying a pre-made version like this. Just be sure not to buy one with added bright green food dye – that color is not appealing on the ham! I also call for extra syrup in my glaze recipe, since many of the jellies will be set quite firm with pectin, and even reheating them doesn’t quite get them to the ideal glaze consistency. Adding in the extra syrup makes it perfectly pourable. You can use honey, corn syrup, agave nectar or even molasses, just make sure it’s nice and thick (maple syrup tends to be too watery).

Where do I get the seasoning for the glaze?

Glad you asked! You get the Red seasoning from my other website, hardcorecarnivore.com. Not only does it add an extra boost of seasoning, but the natural color helps make that glaze really pop.

If the ham you purchase comes with glaze, do not use the extra glaze or your ham will be too sweet.