The classic Aussie sausage roll gets a Texan twist with this all-beef version, studded with fresh jalapeño and cheddar chunks.

Moving to Texas from Australia was a interesting learning curve. Don’t get me wrong, both places are awesome in their own right. And there are many similarities between the two places (just reference the meme about Aussies being ‘British Texans’!). But naturally there was some adjustments that needed to be made. Driving on the other side of the road, finding a good source of Vegemite, and learning to incorporate ‘y’all’ into my vocab are just some of the ways I assimilated. Another big first for me was starting to celebrate Thanksgiving, and learning all about American traditions during the holidays. For example, Prime Rib and Turkey are very ‘American’ dishes – and I hadn’t cooked either until I moved here.

While I enjoyed learning a lot about local holiday traditions (such as the Texan tamalada), I also wanted to start some of my own holiday traditions. Hybrid Aussie-Texan traditions. Dishes that gave a cultural nod to where I came from, along with a tasty salute to where I am now. THIS is one of those recipes. It’s a recipe that represents a near perfect combo of both cultures…at least culinarily speaking.

First the Texan side of things:

Americans love appetizers. We’ll look for any excuse to make a meal solely out of apps – and why not? They’re tasty, bite sized and satisfy the desire to try lots of different tastes at once, instead of being committed to one main dish. If you ask me, the best appetizers are meat focused. Because it’s only natural to want to precede a meat dish…with another meat dish. So we have the love of bite sized apps covered. The other thing that Texans love nearly as much as BBQ and football is the combination of anything cheddar/jalapeño. From kolaches to smoked sausage, dips to cornbread, and of course actual cheddar-stuffed jalapeños. If it has added cheese and spice, you can count a Texan in.

In Australia, wrapping meat in pastry is practically a birthright. I’m sort of surprised that it hasn’t yet somehow been incorporated into the national flag. When it comes to classic Australian party snacks, there are two items you can comfortably rely on being on any decent menu: party pies and sausage rolls. Meat pies are our version of hot dogs at the ballpark – a rich beef-in-brown-gravy stew encased in a golden pastry shell. A party pie is just a scaled down version of a meat pie, in a 1-2 bite portion. Sausage rolls are heavenly pillows of seasoned ground meat wrapped up in flaky puff pastry. It’s similar in concept to a “pig in a blanket”, except the meat is tastier, and the pastry is better. So basically, it’s a far superior version. Traditionally sausage rolls are made using ground pork but I love them even more when they are made with beef.  Additionally, sausage rolls have no sizing restrictions – they can be individually bite sized, or longer “single meal” logs. 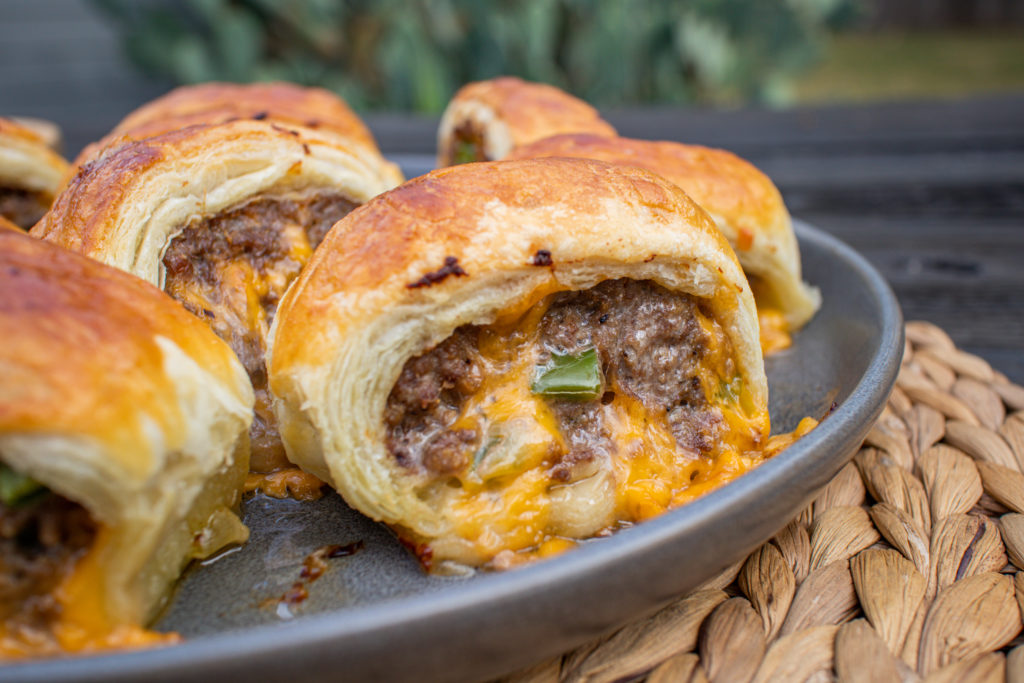 And so to the Beefy Jalapeño Cheddar Sausage Roll:

Marrying the Texan love of appetizers/anything cheddar jalapeño along with the classic party tradition of passing around portions of sausage rolls was a no brainer. A pastry-encased cheesy, spicy, beefy snack is a universal love language. As you’d expect, these are a hit every time I serve them.

More of a visual person? No problem! Here’s the video version of the recipe: