Browning the meat in pork lard and using great quality sauce are the key to these “better than restaurant” venison enchiladas.

Enchiladas really do use so few ingredients that it’s worth going to the effort to get the good ones. The main stars here are the venison, tortillas, sauce and cheese. Using great ingredients is the difference between pretty forgettable enchiladas, and ones that are as good as your local Mexican restaurant. The tortillas, the sauce, and the cheese are the key here.

Processing your venison properly is an often overlooked factor when it comes to a delicious result. That starts with cutting the meat up to grind it. The best tasting grind is free of any silverskin or cartilage, so you want to be sure to trim that away. The cleaner your pieces of meat before you grind them, the higher quality your finished grind will be. Double passing the meat through a grinder (or better yet, using one that does it for you in one pass like this LEM dual grind machine) will also give you a great raw ingredient to start the recipe with.

Don’t forget to toast your tortillas

I prefer using corn tortillas which are the more traditional choice for enchiladas. And unless you have an amazing authentic tortilleria in your ‘hood, heed my advice.  The key is to make sure you warm the tortillas BEFORE you dip them.  Most corn tortillas will be a little brittle out of the package, and if you try to dip them then roll them, they will split. Warming them up makes the tortillas far more pliable and roll-friendly. Theoretically, you could even do this step in a microwave, but warming them on a comal or skillet will also develop a bonus toasted flavor.

Here’s what I’ve come to learn is the real secret to this recipe – you have to use good enchilada sauce. It can absolutely be from a can, but it’s gotta be the good stuff. Generally, the sauces that are imported from Mexico or aren’t a major brand name are best. To me, the “Old El Paso” style sauces are quite watery and lack any real depth of flavor, while the imported ones are richer, thicker and much more developed in flavor and color. I love to use this La Victoria enchilada sauce (you’ll need four cans of it because they’re smaller than average).

If you want that instagram-worthy cheese pull finish, don’t skimp on the cheese. That means both price and quantity. Cheap cheese just doesn’t taste as good, and often will melt away to nothingness. Use more than you think you’ll need for a really cheesy finish, and try to choose cheeses known for their melting ability. I recommend colby jack, cheddar, asiago or if you can find a Mexican blend, even better. 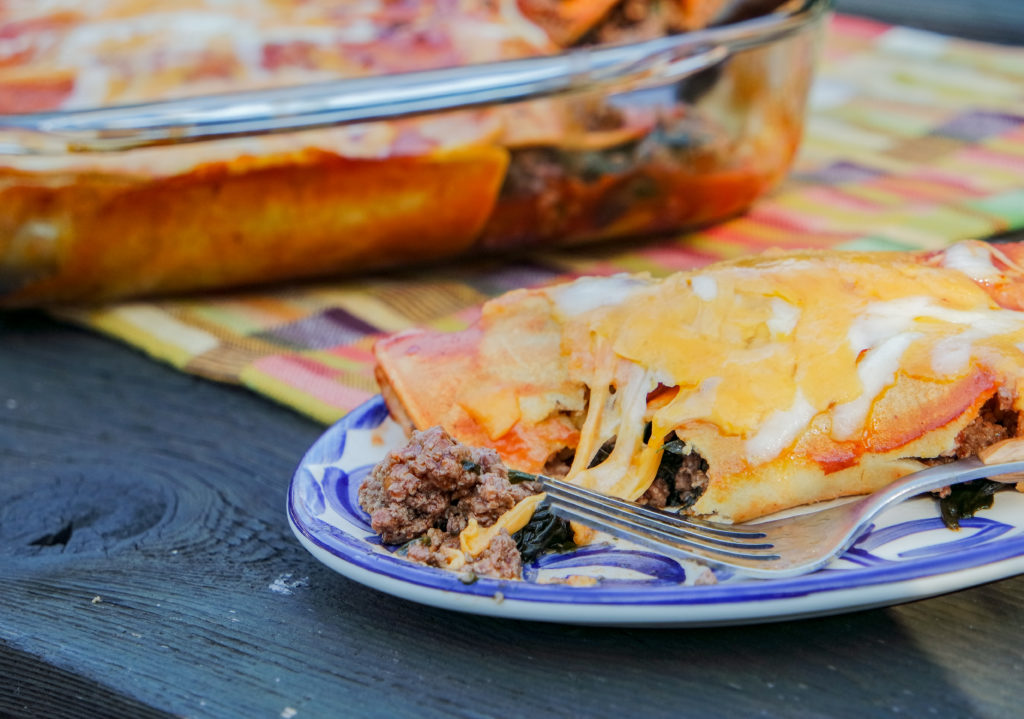