Shatteringly crisp with pops of spicy jalapeno, these latkes are a Texan twist on a Hanukkah favorite (but I reckon they should be eaten all year round!).

Take note – these are not hashbrowns. Though hashbrowns have their place at the breakfast table, they just can’t be compared to the almighty latke. Hashbrowns are griddled, which gives you a hint of crispness but a whole lotta floppy potatoes. Latkes are pan fried and they’re ALL about the crunch. Really you could argue they’re like a flattened tater tot.

Generally, the ingredient list is very simple – potato, onion, S&P, egg and some kind of binder. Traditionally, that binder will be powdery fine matzo meal, but that can be a tricky ingredient to find, so you can substitute with fine breadcrumbs as I have in this recipe (to make it a little more user friendly to those without mm access). Of course, being that I live in Texas, it’s not unusual to add Jalapeño peppers to lots of classic recipes and Texa-fy them (just check out these jalapeno cheddar sausage rolls, for example). Thin slices of jalapeno pepper are a great compliment to the crispy latkes, adding the right burst of heat, which is perfectly offset with a scoop of the cooling avocado sour cream.

There’s a trick to getting extra crispy latkes and it involves getting as much of the water out of the potatoes as possible. It really is a crucial step that shouldn’t be missed, but I have come up with a great hack – a potato ricer. If you don’t already have one, a potato ricer (which ironically has nothing to do with rice) is a press for making the creamiest and smoothest mashed potatoes. But because it’s a press, it’s also perfect to use for squeezing every last drop of moisture out of the shredded potato. That’s what I use on both my potato and onion to remove the water, but if you don’t have a ricer you can simply put the shredded veg into a dish cloth, twist them up into a ball and squeeze to get the moisture out. 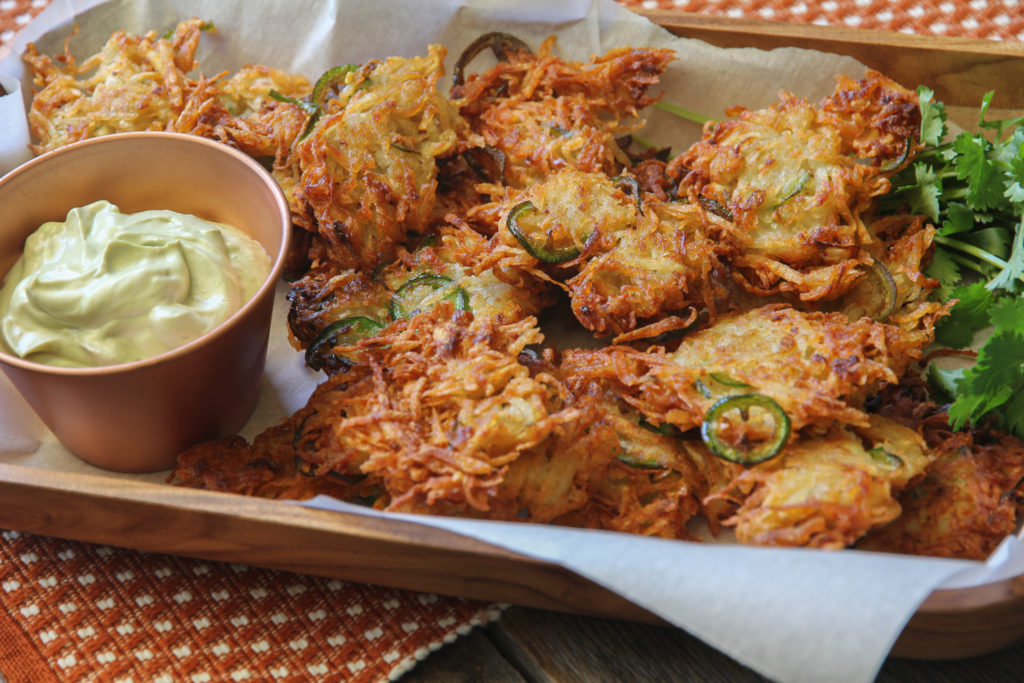