A Barbecue Restaurant Where You Order The Fried Chicken

Bill Miller is a barbecue restaurant, but you should probably go there for the fried chicken.

Oh gee… how do I talk about Bill Miller without offending anyone who enjoys it and/or has fond memories of it? Ok, let me give it a shot:

Bill Miller Bar-B-Q is a fairly unremarkable restaurant chain (with dozens and dozens of stores in Texas), who fill a niche providing cheap and hearty traditional meals in a cafeteria style setting. I guess they’re like a BBQ McDonalds. Or Luby’s. Generally, no one I know would go there for barbecue, ever. Like, ever.

In summation, you do not go to Bill Millers to eat barbecue. HOWEVER! You do go to Bill Millers if you want a decent and cheap serve of fried chicken. Listen, I’m not going to lie, I didn’t fall in love with the joint like I did with other “no frills” classic Austin eateries (like Top Notch or The Frisco), but there’s something endearing about Miller’s. Kinda like the adorable yet uncoordinated kid who gets the “good try” ribbon.

Maybe it was the customers who made it so memorable? A combination of good ‘ol boys eating big portions on disposable plates and older retired couples enjoying a late (6pm) dinner. The best part was when one of them held up their pie and announced to the whole restaurant I was welcome to take a picture of his food, too, a statement which was met by laughs from neighbouring tables. Apparently in this particular time warp, taking photos of your food is not the norm. Once I explained why I was actually taking photos instead of just eating the food,  the tables uttered a collective “ahhh” and suddenly I wasn’t all that weird. There was something so charming about that little exchange- the type of friendly all-inclusive interaction that is much more reminiscent of a small East Texas town than a large fast growing city.

Or maybe, it was the incredible decor: 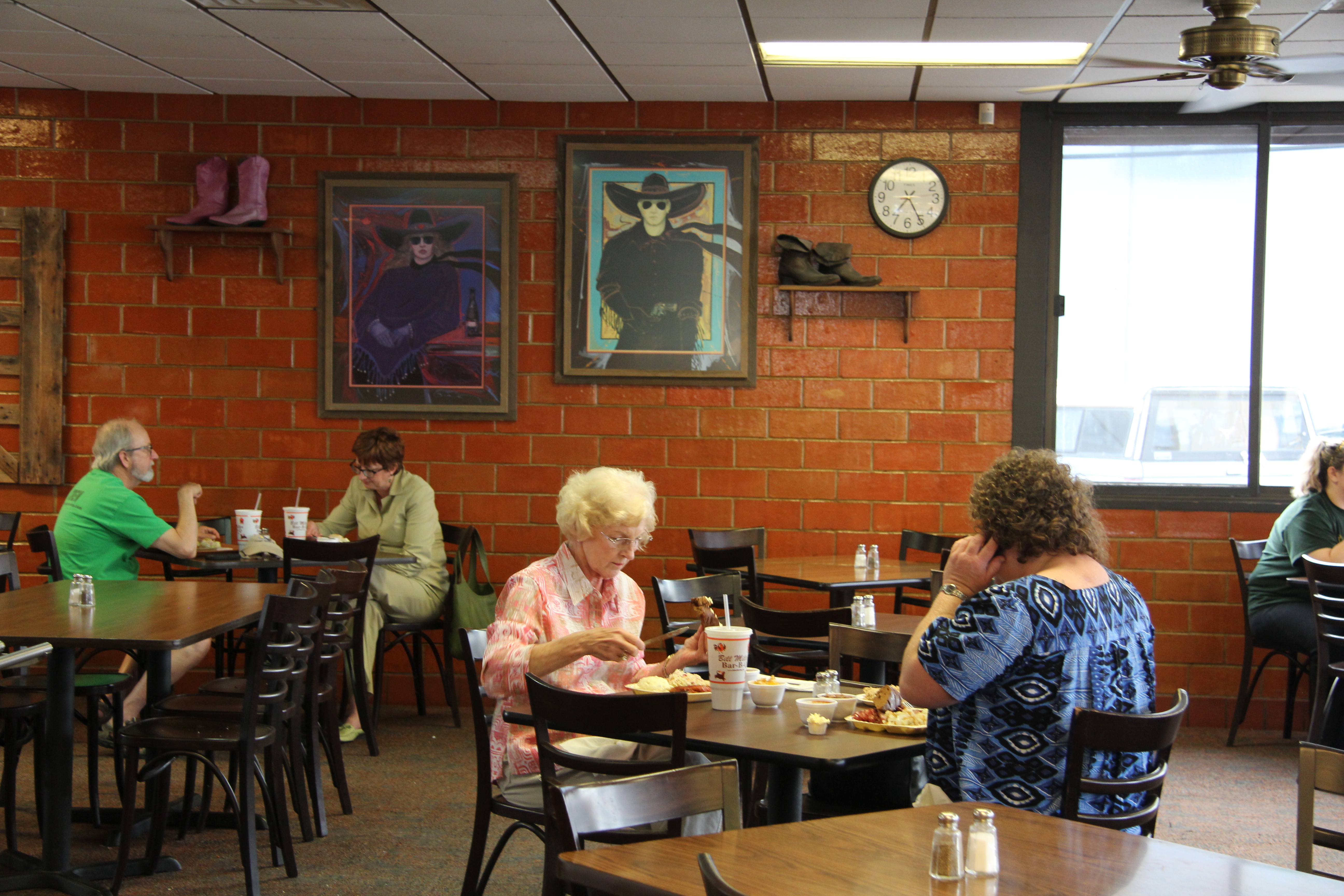 The layout is a classic cafeteria style, you can ever hand select your own pre-cut piece of pie and there’s a giant condiment station in the middle of the dining room. Here’s the thing, Bill, (can I call you Bill? I feel like we’re at that stage now), I’d rather get free refills on my soda (which they don’t offer) than have unlimited access to a pan of whipped butter. 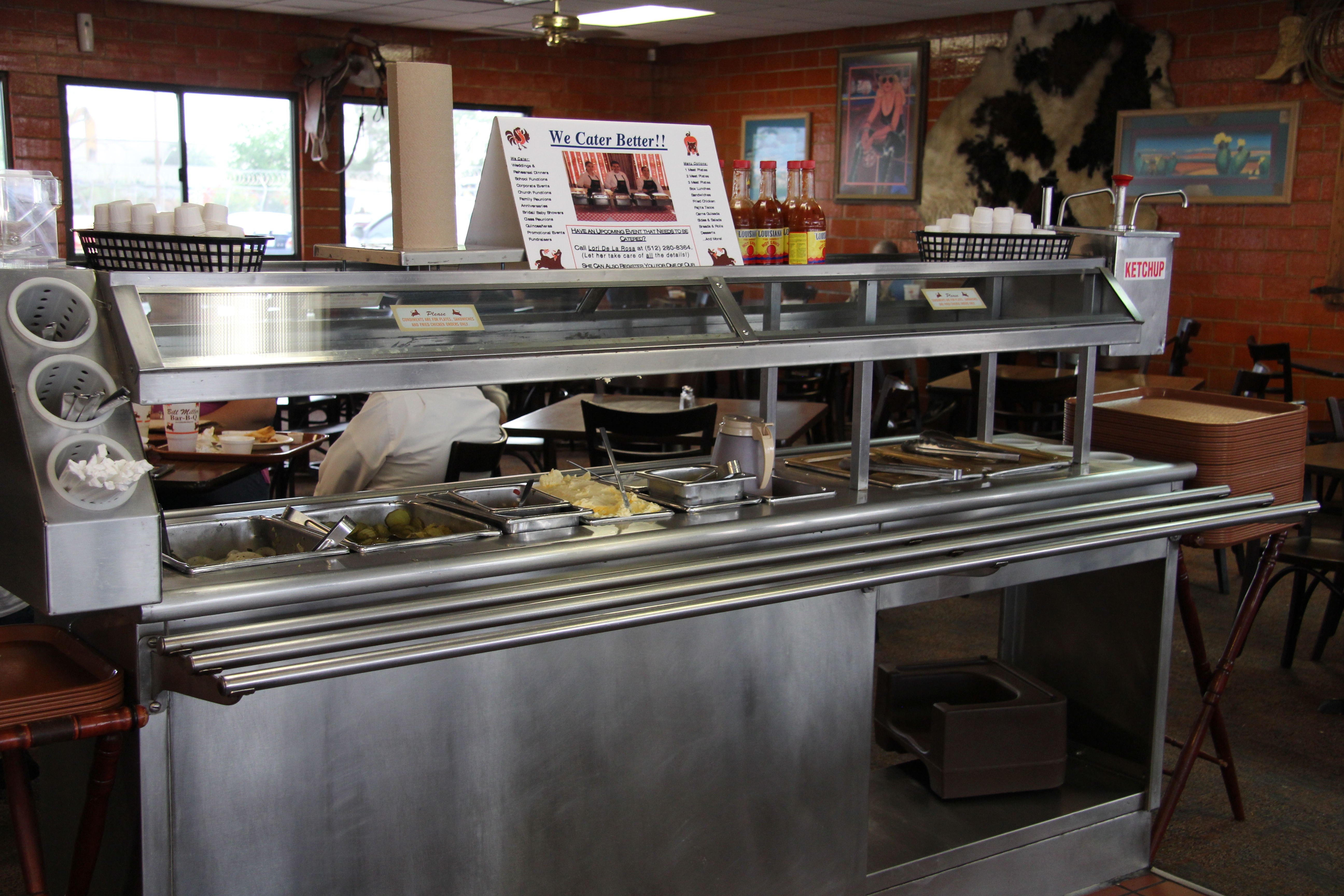 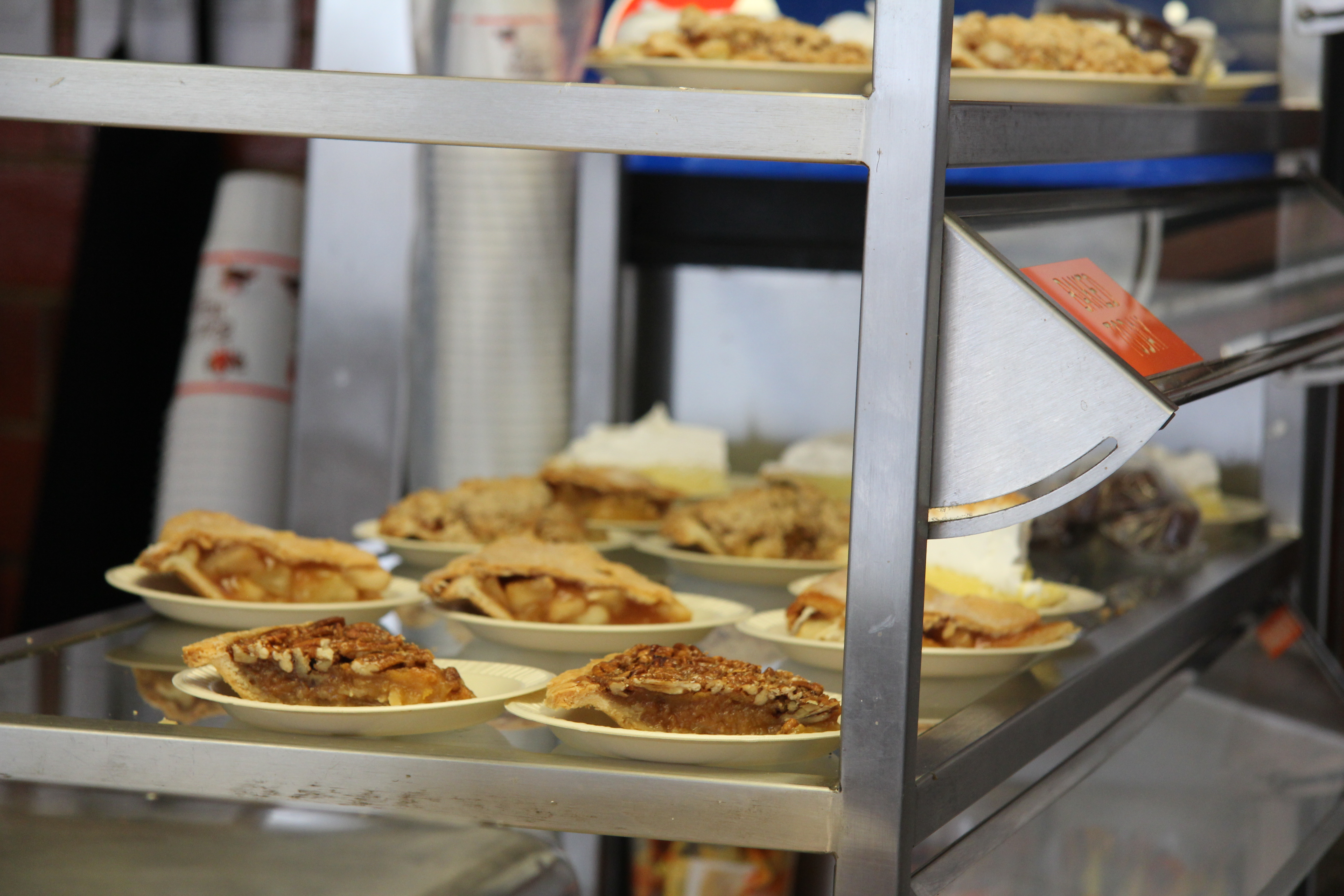 Because he apparently likes punishing his insides, Cole ordered a side of sausage which was mercifully subjected to death by drowning (in a flat, translucent sauce). 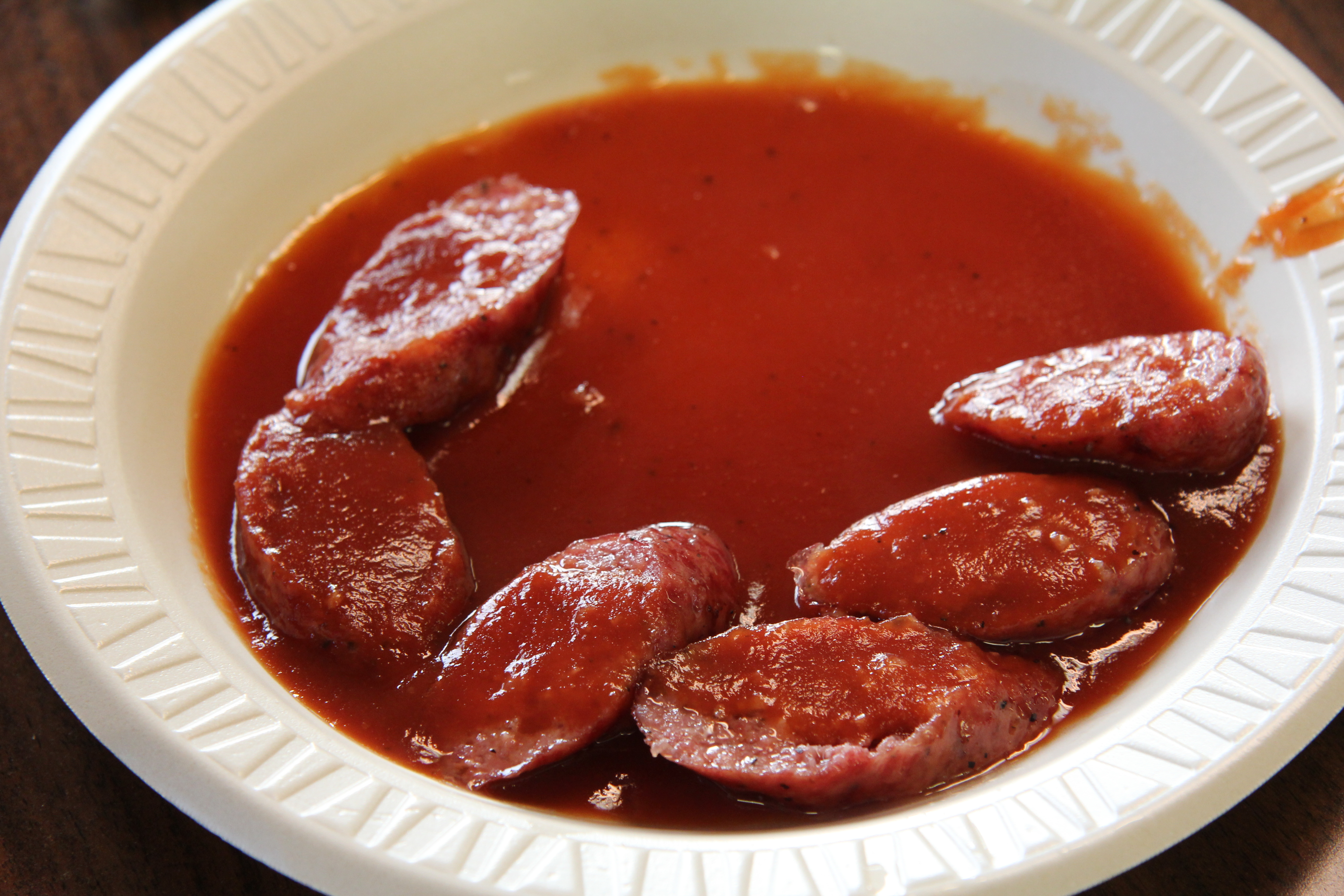 Do you want further verification you may prefer not to eat BBQ here? Let me give you this picture and two words: steam table. 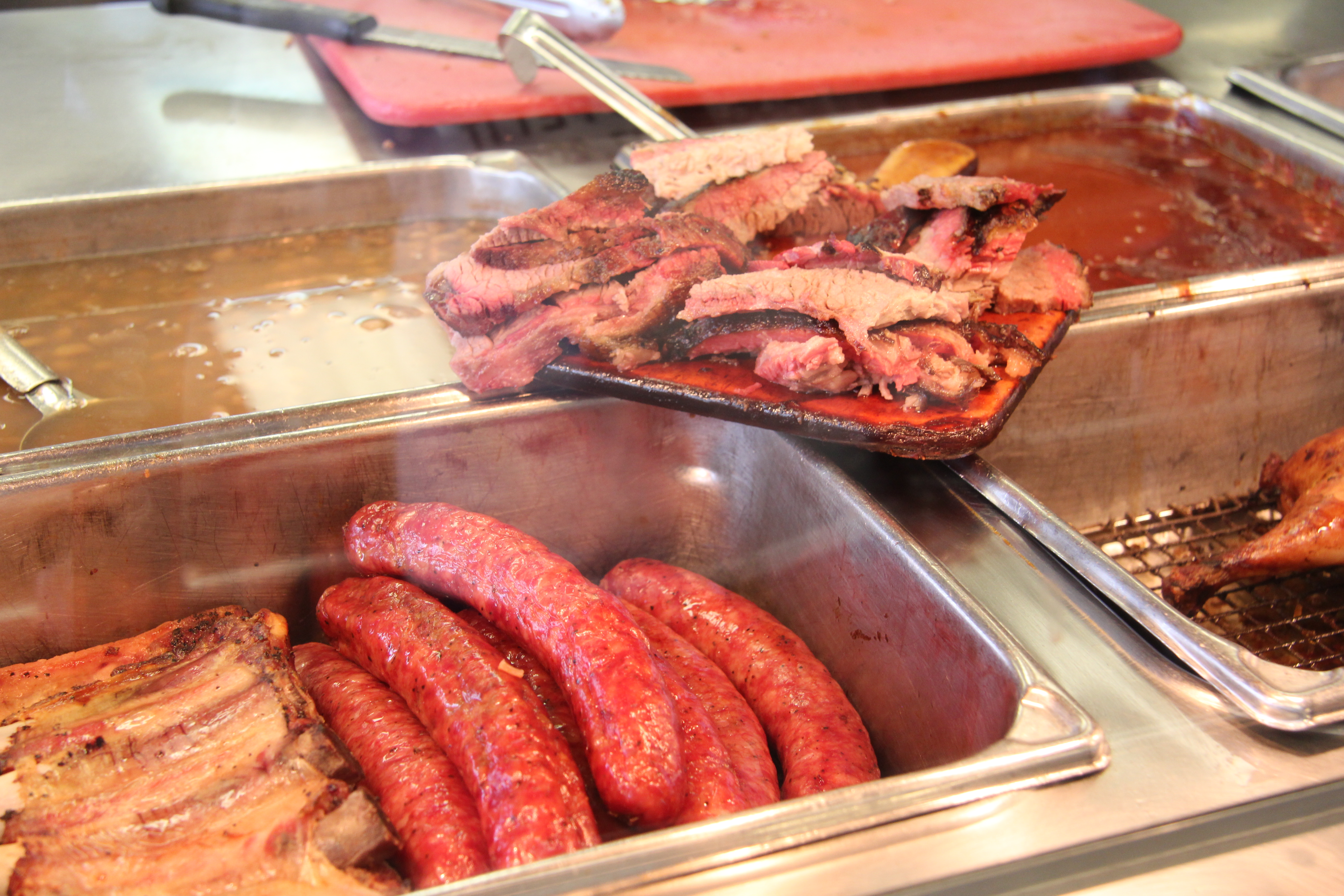 As much as I have enjoyed the sarcastic fodder the BBQ provides, the point of this post is that the chicken (and chicken-related dishes such as sandwich and chicken fried steak) is pretty good. Awesomely crispy batter, reasonably moist chicken, crisp salty fries. Sure, the coating is a little tame and could use a real kick of seasoning, but if I had to eat here again I wouldn’t be upset. At any rate, you’re about to see a series of seriously beige foods. Surely this meal needs to win some kind of award for staying within a really focused colour palette. 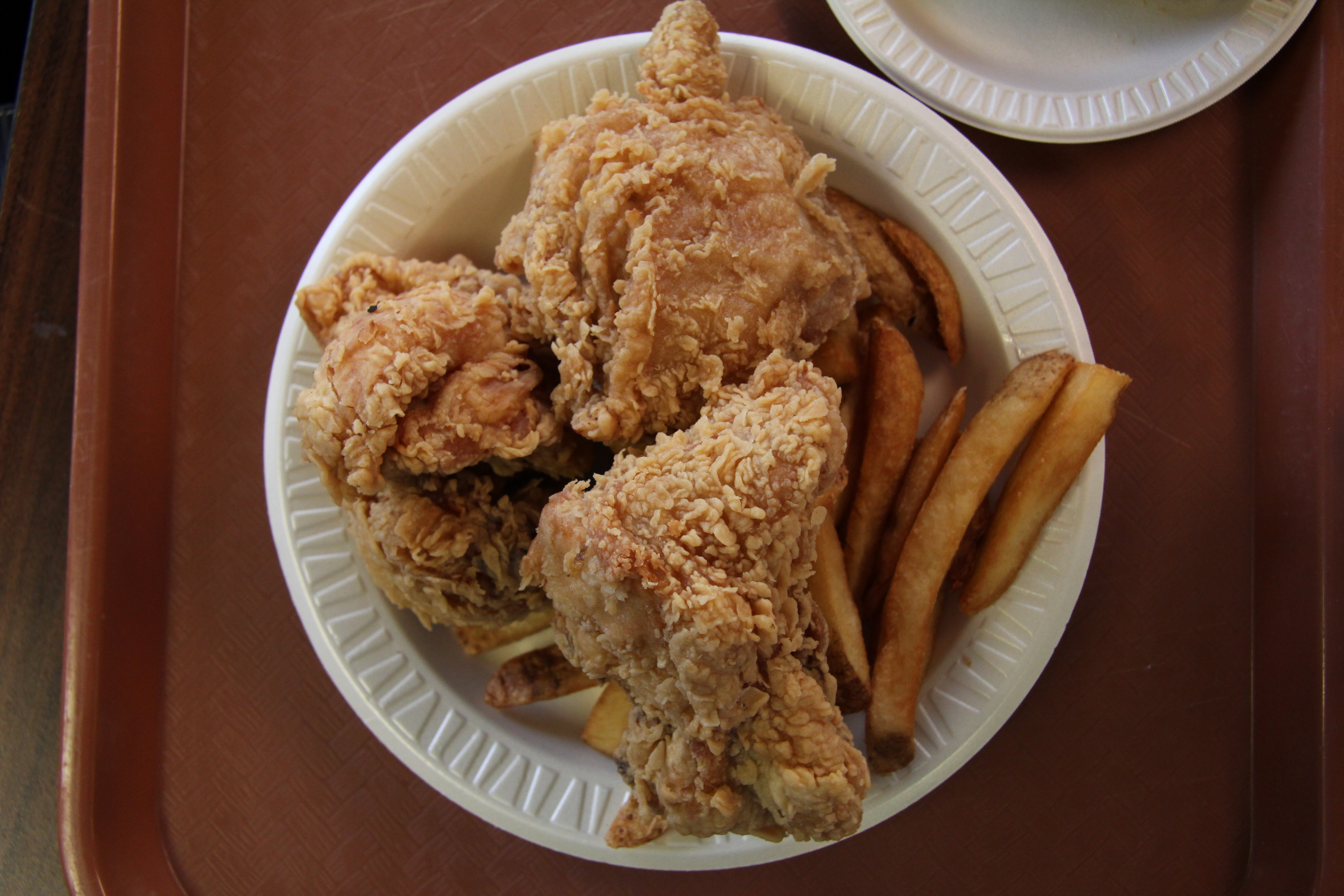 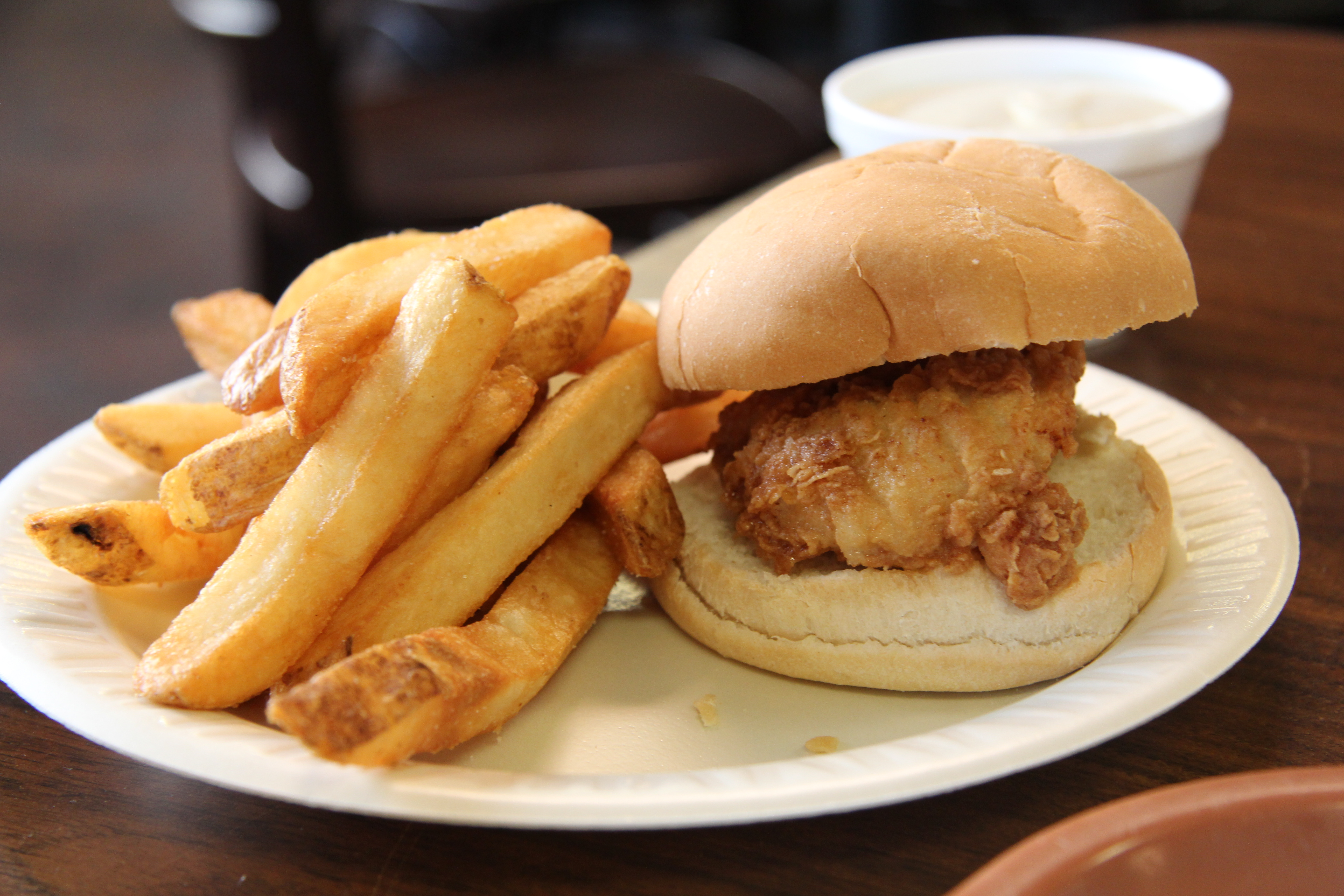 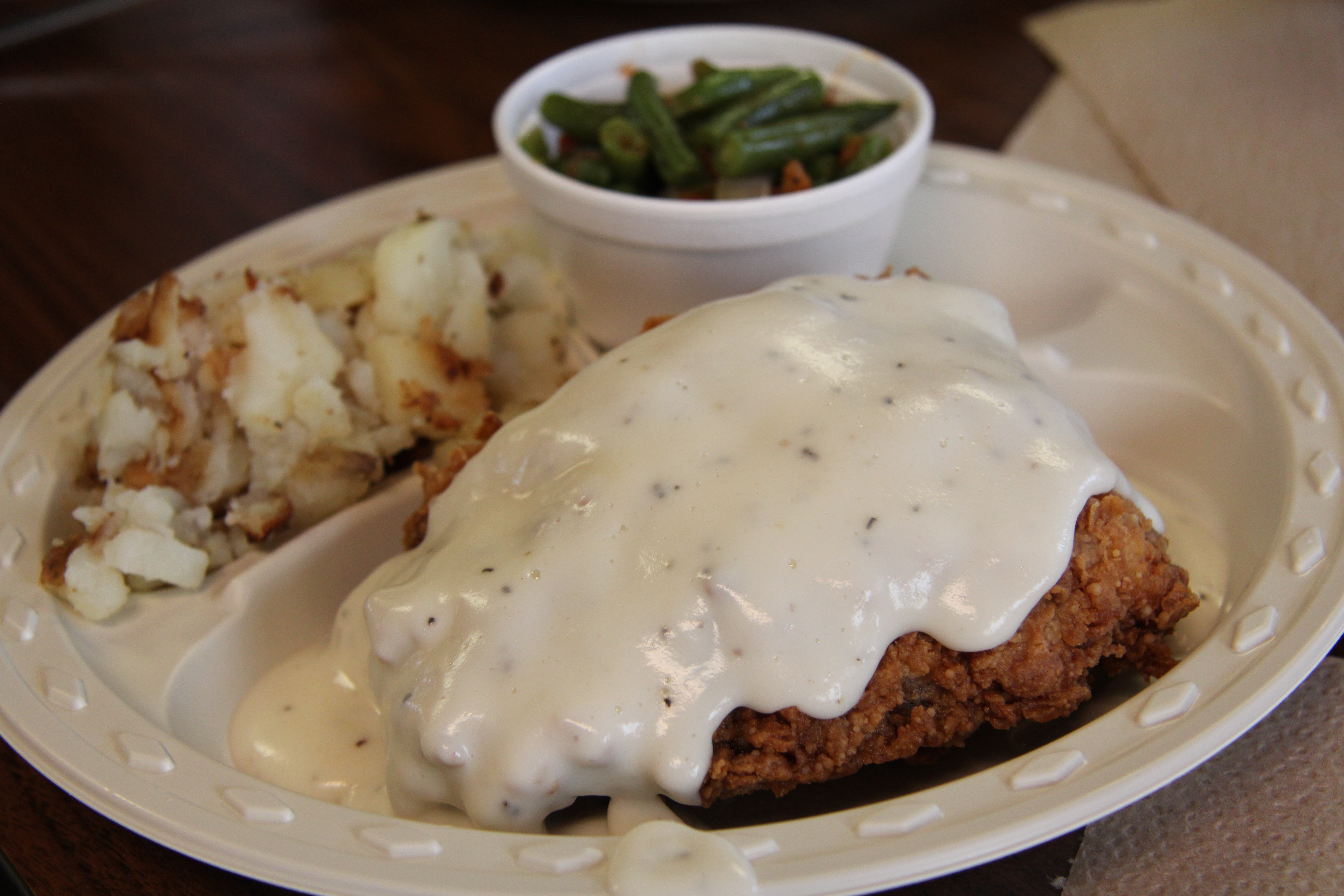